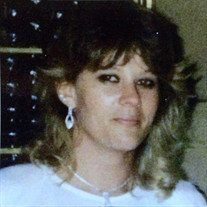 Yvette Monique Duncan arrived fashionably premature on July 7th 1964 as the second of four Air Force brats, spending most of her youth in Carlsbad, New Mexico, of which she spoke of often and fondly. She didn't have to finish high school to learn life's hard lessons but would go on to meet the love of her life, Dean A. Hoth, who would give her his last name on February 27th 1990, a beloved daughter on August 16th 1990, and reach the top shelf for her forever. From Westlake, Louisiana to Orlando, Florida to Oakdale, Louisiana all the way to Oxford, Alabama where they settled for more than 20+ years, Yvette would dedicate herself to being an outstanding mother and wife. She believed being a mother was her ultimate calling until her title changed to Nana on November 12th 2014. With this new lease on life, she set out to put a dent in the world's watermelon supply, toy stocks, and their bank account. Nothing less for a prince that could do little wrong in her eyes. On August 29th 2019, her gracious daughter granted yet another wish and gave her a granddaughter. Once again she was convinced that Angels came to live on Earth. Little did she know that it skipped a generation. She was known for her vivacious personality, illuminating smile, infectious laughter, endless generosity, and her deep abiding faith in Jesus Christ. She was the epitome of love in motion, a mother for one and a mom for all, a safe space, always fighting for what she thought was right and she had the inability to lose a fight. She had a special place in her heart for holiday traditions, shopping trips, all things silly, rockin' and genuine, although she loved all things macabre and Halloween. She will always be remembered for her skill and affinity to find joy in cooking for and feeding others, as can be attested to by none more so than her husband of 30+ years, where physical evidence has been provided. As a voracious animal lover she spent a lifetime rescuing and spoiling numerous cats, birds, squirrels and the occasional dog. She was also a firm believer in random acts of kindness as well as never waiting until any special occasion to give a gift. To honor her memory we ask that you "pay it forward" whenever possible. She goes to heaven as our guardian angel to meet her precious son Tommy, her father and mother Harold and June Duncan, a long time friend Donna Thompson, along with a menagerie of cats to keep her company. I hear heaven's credit card has no limit but the cell service leaves a lot to be desired. She is survived by the lights of her life, Oliver Whitley and Evangeline Alma Rose, her loving vagabond daughter, a truly devoted husband whom she adored, two sisters Yvonne and Yvelle (Yvellamie), a baby brother Tony (Tigger), two very spoiled cats, a dog that she tolerated and many family members and friends that will miss her dearly. Yvette left this world the same way she came: fighting and way too early. She will live on in our hearts.

Yvette Monique Duncan arrived fashionably premature on July 7th 1964 as the second of four Air Force brats, spending most of her youth in Carlsbad, New Mexico, of which she spoke of often and fondly. She didn't have to finish high school to... View Obituary & Service Information

The family of Yvette Monique Duncan Hoth created this Life Tributes page to make it easy to share your memories.