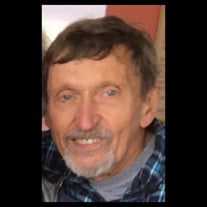 William Tipton, age 84, passed away September 17th, 2021 at Regional Medical Center in Anniston. He was born on January 14, 1937. Bill is survived by his brothers Roy, Jr., and Charles Tipton; three daughters, Cathy Clark, Joanne (Teri) Leathers, and Donna Bleicher; grandchildren, Candace McMahen, Christopher Clark Jr., Christina Phillips, Kenneth Ware, Jason Leathers, and Nichole Bond; great grandchildren, Rebecca Clark, Nickoli Alcala, Brianna Long, and several extended family members. Bill served his country for 8 years in the US Naval Reserve. An electrician by trade, his career spanned decades in this field until his retirement from the US Bureau of Engraving several years ago. During that career, and well into retirement, Bill was always ready to help his family, neighbors, friends, and anyone else in need; shuttling about in his minivan from home to home to help fix whatever needed fixing, and to share the good word. Never a man to sit still, he seemingly paused only for a meal, for prayer, and on the Sabbath in honor of God's word. A man of strong faith, Bill was a member of the Anniston Seventh-Day Adventist Church. He was devoted to God and our savior Jesus Christ in whose embrace Bill will forever glory. Bill was preceded in death by his wife, Patricia and, earlier this year, by his brother, Jacob Samuel Tipton. Bill's remains have been interred at the Dogwood Trail Memorial Gardens in Oxford, Alabama.

The family of William Tipton created this Life Tributes page to make it easy to share your memories.