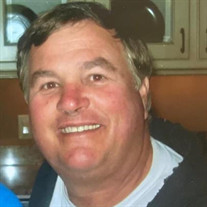 William Kenneth “Ken” Nunnally died following a knee surgery on June 9, 2021, at his home in Riverside, Alabama. He was born in Calhoun County on March 1, 1949, to parents Millard Alvers “Buster" Nunnally, Jr., and Annie Jovita “Skeet” Nunnally and grew up in Anniston, Alabama. Ken graduated from Anniston High School in 1968 and attended Gadsden State Community College. He obtained his pilot’s license and served in the U.S. Army Reserve. Ken was a family man, with a gracious heart and a bigger than life personality with a gift to make everyone around him laugh. He was known as a hard-working entrepreneur who developed family homes in his community and was the founder of Nunnally Glass and framing, and jointly owned, developed and operated Pine Hill Country Club. Ken loved cars and motorcycles, racing dragsters he built or owned over the years. Other hobbies included golf, fishing, car shows and flying. He loved traveling with family and friends in his motorhome with his beloved dog “Rocky” by his side. Ken was a believer in Christ and attended Parker Memorial and Golden Springs Baptist Church in Anniston. Ken is proceeded in death by his son, William Kenneth “Kenny” Nunnally, Jr., Millard Alvers “Buster” Nunnally, Jr.,and Annie Jovita “Skeet” Nunnally. He is survived by his wife Dianne Allred Nunnally of Anniston, his daughter Julie Nunnally Harris and her husband West Harris of Birmingham, and grandchildren Anson, Will and Rachel Harris, his stepdaughter Wendy Kitchen and her husband Jim, step-grandchildren Camden and Blair Kitchen, his brother Millard Alvers “Skipper”Nunnally, III. and his wife Jill and Sister Jeanette Dobbins and her husband Clayton, and many beloved nieces. A family graveside service will be held at Forest Lawn Cemetery (730 Golden Springs Road in Anniston) on Thursday, June 17 at 11:00 am in Anniston. A celebration of life with family and friends will follow at Classic on Noble (1024 Noble Street in Anniston). Memorial contributions may be made to Anniston or Birmingham Humane society, The American heart association or the charity of your choosing.

The family of William Kenneth 'Ken' Nunnally created this Life Tributes page to make it easy to share your memories.