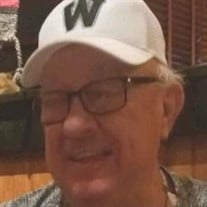 William S. (Bill) Kelley passed away Thursday, January 23rd, peacefully with his family at his side. Bill was born to William Gordon Lee Kelley, Sr. and Edna Brooks Kelley on July 14, 1946 in Anniston, Alabama. Bill attended Oxford High School and graduated. He was an alumni of the class of 1964. He attended Jacksonville State University. Bill worked for General Motors (GM) Automotive Assembly at their plants in Arlington, Texas, West Monroe, Louisiana, and Decatur, Alabama. Bill worked for GM for 35 years before retiring in 2007. His hobbies included watching his beloved Wellborn Panthers play football and baseball. You could always find him in the stands cheering them on! He was also an avid fan of Alabama and was even known to some as “Bama”. When he wasn’t watching sports, he was busy spoiling those that called him Poppa or Poppa Bill. He always had a Coca-Cola and a Hershey Bar or Reese’s Cup for all his many “grandbabies”. Bill was preceded in death by his father Gordon Lee Kelley, Sr., his stepfather Jessie Edwards, and his mother Edna Kelley Edwards. Surviving relatives include his children: His son, Shayne and wife Kim Kelley of Mansfield, Texas, his daughter, Ericka LeAnn and husband Rod Laymon of Oxford, Alabama and his bonus daughters Sasha Holt of Pell City, Alabama and Dia’ Webb of Anniston, Alabama. 7 Grandchildren: Madison Laymon, Kameron Goodwin, and Kaden Goodwin all of Oxford, Alabama, Kohl Kelley, Kooper Kelley, and Addison Shayne McKinney Kelley all of Mansfield, Texas and Morgan Jordan of Richmond, Kentucky, brother Gordon Lee (Carol) Kelley, Jr., sister Patsy (Ken) Brewer , and brother Gary Michael (Theresa) Kelley and many nieces and nephews. Wear your Alabama attire and join us for a Celebration of Life in Bill’s honor at Greenbrier Road Baptist Church, Anniston, Alabama on Saturday, February 1st, at 2:00 p.m. In lieu of flowers a donation may be made at the Celebration of Life to a scholarship fund in Bill’s honor.

The family of William S. 'Bill' Kelley created this Life Tributes page to make it easy to share your memories.