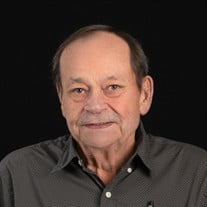 Mr. Walter Harvie Mizzell, 68 of Oxford, Alabama, passed away on June 19, 2021 at Anniston Health and Rehab. A visitation will be held on Tuesday, June 22, 2021 from 6:00 pm - 8:00 pm at Miller Funeral Home. A service will be held on Wednesday, June 23, 2021 at 2:00 pm in the Toby Miller Chapel at Miller Funeral Home. Dr. Bart Owens will be officiating. A burial will follow the service at Coldwater Baptist Church. Left to cherish his memory is his wife of 47 years, Mary C. Mizzell; son, Wayne (Laura) Mizzell of Oxford, and his grandson, Tyler Mizzell of Oxford. Mr. Mizzell is preceded in death by his parents, Willie O. and Sarah Mizzell of Munford; sister, Margaret Mizzell Lathem of Munford; brother, Martis Mizzell of Tyler, TX, and a granddaughter, Anna Faye Mizzell of Oxford. Mr. Mizzell was a native of Munford, Alabama and moved to Oxford in 1974. He was a truck driver for over 40 years and logged over 3.5 million safe driving miles in his career. He was employed with Floyd & Beasley for 11 years and retired from FedEx Freight after 20 years of service. Mr. Mizzell was a member of Coldwater Baptist Church in Oxford. Mr. Mizzell was also a member of the Hartwell Masonic Lodge in Oxford. Pallbearers will be Brian Childers, Jeff Latham, Alen Lathem, and Todd Gauntt. Mr. Mizzell was a loving husband, father, and Papa. To order flowers, please visit: www.millerfloristandgifts.com or call 256-835-0911

The family of Mr. Walter Harvie Mizzell created this Life Tributes page to make it easy to share your memories.