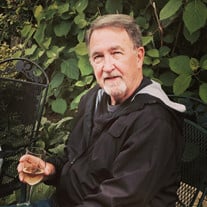 A Celebration of Life for Tommy Walker of Anniston, AL will be held Sunday, November 24 at 2:00 at First United Methodist Church Anniston. The family will receive friends at the conclusion of the service. Tommy passed away at home, Tuesday, November 19, 2019. He is survived by Sandra, his loving wife of 53 years, two daughters - Janet (Clay) Goff and Jennifer Walker, and a brother - Richard (RL) Walker. He also leaves behind four adoring grandsons - Andrew Walker and Caleb, Collin, and Caden Goff. He is preceded in death by his parents - Ray and Anna Lee Walker and four siblings - Patsy Large, Don Walker, Wylene Walker and Vance Walker. Tommy was a graduate of Alexandria High School in 1961 where he was voted most handsome and was a star on the high school basketball team. Upon graduating, he joined the Air Force and developed a love for aviation. After an honorable discharge, he returned to Anniston where he met and fell in love with Sandra, and they married in 1966. The next 53 years of his life was filled with much laughter, joy and success. He was a history and economics teacher and basketball and track coach in the Talladega and Calhoun County Schools Systems where he earned the nickname “Killer.” Once he retired, he started a second career in computer technology and worked for Software Technology, Inc. and installed computer systems into many school districts in the Southeast. Tommy had a wide variety of hobbies and pursued each with drive and determination. He loved to fish and his competition with his son-in-law Clay was a source of many long-standing “fish tales.” He took up running in his 40s and completed multiple marathons with his running pals, Randy Fortune and Bob White. He had a life-long passion for music. Tommy was a music director at West Point Heights and in various gospel singing groups, like the Moore Avenue Trio and The Harmony Echoes. Later in life he enjoyed playing the bass guitar at the Friendship Community Center and with several different groups like the Anniston Bar Church Band. He spent most of his time practicing and playing with his band “On The Fence” and performing at countless community events. His biggest dream as a teenager was to become a pilot. He was able to fulfill that dream in his early 50s. He bought his first airplane, a Cessna 175 and he and Sandra delighted in the ability to fly to different destinations instead of driving. After he retired for the second time, he and his friend Randy Fortune decided to build their own airplane. This became a consuming passion and soon after the first one was completed and sold they started on building the second one. He was in the process of working on his third plane when he passed away. Tommy also loved to travel. He and his friend Carl Gooding were always looking for a new place to go and explore with their group of friends. Among their travels they visited New England, Boston, New York, National Historic Places in Pennsylvania and the Naval Academy in Annapolis, Maryland. He always looked forward to his time spent at The Villages, going to Braves games, and attending JSU and Georgia Southern football games. Tommy’s life was spent doing exactly what he wanted to do. Enjoying friends, telling corny jokes, and spending time with his grandsons made him a happy man. We will always remember his love and dedication to our family. “Dad,” “Pappaw,” “Mot Reklaw,” and “Pawbird” will forever be in our hearts. Online condolences may be left to the family at www.millerfuneralhomeoxford.com To order flowers, please visit www.millerfloristandgifts.com

A Celebration of Life for Tommy Walker of Anniston, AL will be held Sunday, November 24 at 2:00 at First United Methodist Church Anniston. The family will receive friends at the conclusion of the service. Tommy passed away at home, Tuesday,... View Obituary & Service Information

The family of Mr. Thomas 'Tommy' Walker created this Life Tributes page to make it easy to share your memories.

A Celebration of Life for Tommy Walker of Anniston, AL will be...