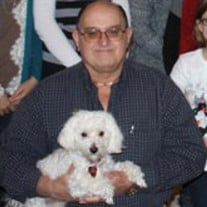 Thomas Warren Stovall, better known as T.W. or Tommy, passed away at his home on November 25, 2018 after an extended illness. He was 79 years old. He was preceded in death by his parents, Norman Edgar and Cora Lee Sheffield Stovall and his spouse, Mary Frances Meharg Stovall, whom he adored. He leaves behind to cherish his memories his loving sons, Brian Keith Stovall Sr. (Holly) and Jonathan Eric Stovall (Selina); his loving grandchildren, Brian Stovall Jr. (Brandy), Katie Ballenger (Jeff), Tyler Stovall (Kristi), Hunter Stovall and Ansley Stovall; great grandchildren, Lynnlee Smith, Dani Jayde Stovall, Brian Stovall III, Asher Stovall, and Bo Ballenger. He will be greatly missed by his sidekick Maltese dog, Skeeter. Tommy loved cars, trucks, loved to work on motors, build things out of wood. He was one of Nascars’s greatest fans who never missed a race on TV and worked the gates at Talladega for many years. He retired from Bell South after 34 ½ years of service. He worked many areas post tornadoes and hurricanes and his family went with him if possible. He and Mary Frances were avid yard sale enthusiasts looking for antiques to put in their booths they had at several malls. He loved sports and coached his son’s teams throughout the years. He was happy to follow his grandsons around to watch whatever they were playing. Brian, Tyler and Hunter played in high school, college and pro teams and if he couldn’t travel, he kept up by phone with Eric and Brian. He was proud to be a Papa to two pro ball players as grandsons which he said was rare. He always had Ford vehicles and trucks and was a Ford man, maybe because his dad worked for Ford for 48 years. Special thanks to Matt ‘Mike’ Goss, his caregiver, and Amedisys Home Health and Hospice for always being there when called. A funeral service will be on Wednesday, November 28, 2018 at noon in the chapel of Miller Funeral Home. Jerry Ponder Jr. will officiate. The family will receive friends on the same day from 10:00am until the time of the service. Pallbearers will be Brian Stovall Jr., Robert Tyler Stovall, Hunter Grant Stovall, Jeff Ballenger, Matt Goss, Mayor Alton Lawrence Craft and Mike Smith, with Greg Crance serving as an honorary pallbearer. In lieu of flowers, the family requests donations be made to St. Jude’s Children’s Hospital.

Thomas Warren Stovall, better known as T.W. or Tommy, passed away at his home on November 25, 2018 after an extended illness. He was 79 years old. He was preceded in death by his parents, Norman Edgar and Cora Lee Sheffield Stovall and his... View Obituary & Service Information

The family of Mr. Thomas Warren 'T.W. or Tommy' Stovall created this Life Tributes page to make it easy to share your memories.