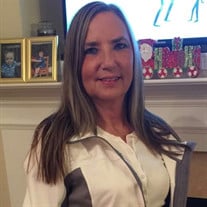 Tammy Irene Ward, 59, of Oxford, AL passed away Thursday, September 23 rd , 2021 at UAB hospital. Tammy was born February 13th , 1962 in Wedowee to the late Tom Mack McLeod and Shelby Jean McLeod. Tammy was many things to her family and friends, but above all she was a dedicated mother, grandmother, and wife for many years. She cherished spending time with her kids, the loves of her life, and reason for living. She loved cooking for her family every night, while her kids were growing up. Listening to music was her favorite thing to do in her free time, she called it “her therapy”. Tammy graduated high school in 1980, where she was a cheerleader, homecoming queen, beauty queen, and Valedictorian of her senior class. Upon graduation, she received a scholarship to JSU where she was in a B.S. Nursing program and lived in the dorms on campus. She married Jack B. Ward Jr. February 14 th , 1981 – who she was married to for 30 years. They had three children, who they raised together in Harrisburg, NC. Tammy was a certified LPN since 1984, and she was licensed in five states. She was an extremely selfless person and would say “Her calling in this life was taking care of others and raising her children”, she accomplished both with grace. She enjoyed playing the piano – She played at Harrisburg Baptist church, where she was a member for many years. She was also a member of Union Baptist, where she attended Church throughout her years of youth. Tammy also enjoyed reading books, cooking, cleaning, writing, singing & music, cards, volleyball, and sports. Survivors include Daughter, Nikki (Walter Lee Parker) Ward; Sons, Lucas McLeod Ward and Zachary Mack Ward; Grandchildren, Jayden Bentley Stone (Nikki), Harper Grace Ward (Lucas), Zoey Sky Ward & Levi Sean Ward (Zachary); Sister, Tilli McLeod Bain; Uncle, Mike White; Aunt, Annette Robertson. Millers Funeral Home of Oxford is serving the Ward family.

The family of Tammy Irene Ward created this Life Tributes page to make it easy to share your memories.