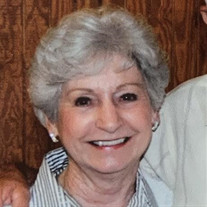 Shirley Ann Smithers Justice went to be with the Lord on Wednesday January 22, 2020 after a long illness. She is survived by her husband of 65 years, James W. ‘Jim’ Justice Sr.; two sons, James W. ‘Jimmy’ Justice Jr. and wife Jane, Keith Allen Justice and wife Sharon; two granddaughters, Amy Justice Sanford, Leah Justice Allen (Brian); two grandsons, Joshua Zane Justice and Zachary Cane Justice. She is also survived by five great grandchildren, Emma Sanford, Ella Sanford, Hayes Allen, Mary Miller Allen and Caroline Allen as well as several nieces and nephews, and a special young lady, Stephanie Gibson who she dearly loved. She is preceded in death by her parents, Glenn and Callie Smithers; a brother, Buck Smithers; a sister, Mildred Tanner and a sister, Francis Bass. Shirley was born in Enville, Oklahoma on December 7, 1936. She met Jim, who was serving in the Armed Forces, in Ardmore, Oklahoma and they married after a short courtship on June 5, 1954. Jim eventually brought her to Alabama, where he was from, in 1967. They started their business in Oxford, Alabama in 1979 and called it Farm Systems. During their marriage, they traveled a lot for pleasure. But, the travels they enjoyed most were when they were on mission trips to Mexico to help the people of Mexico build churches and to Florida and Mississippi to help rebuild houses that were destroyed or damaged by hurricanes. She was a loyal member of First Baptist of Williams in Jacksonville, Alabama. Shirley was a devoted wife, mother, grandmother, great grandmother, mother-in-law, and friend to so many. Shirley loved with a passion her family, her friends, and her Lord and Savior, Jesus Christ. She was a good and faithful servant. Pallbearers will be Zachary Justice, Brian Allen, Johnny Adams, James Coley, Keith Johnston and Tim Nunnally. The family wishes to thank anyone who sent a card, called, visited, and brought food during this time. We would like to say a special appreciation and heartfelt love to her caregiver, Kayla Carter. You will never know how much we appreciate each and every one of you for your encouraging words, handshakes, conversation, hugs and what they meant to Jim and our family. May God bless you all. A funeral service will be held on Saturday, January 25, 2020 at 11:00 am in the Toby Miller Chapel at Miller Funeral Home. Pastor Chris Thomas and Ret. Pastor Clyde Roberts will be officiating. A burial will follow the service at Dogwood Trail Memorial Gardens. The family will receive friends on Friday, January 24, 2020 from 6:00 pm – 8:00 pm at Miller Funeral Home. In lieu of flowers, donations can be made to the R&R Fund at First Baptist Church of Williams at 5579 Nisbet Lake Rd, Jacksonville, Al. 36265

The family of Shirley Ann Smithers Justice created this Life Tributes page to make it easy to share your memories.

Shirley Ann Smithers Justice went to be with the Lord on Wednesday...