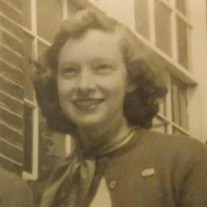 A graveside service for Sara Campbell Jones, 85, of Munford, will be Sunday, May 2nd, 2021 at 2:00 pm, at Hillcrest Cemetery in Munford. Brother Mike Benson will be officiating. Mrs. Jones passed away in her home, Wednesday, April 28th, 2021. She is survived by her daughters Diane (Jerry) Sanderson and Robin (Marty) Hill, both of Munford; grandchildren Adam (Jennifer) Sanderson of Tucker, GA, Derek(Selena) Sanderson, Laura (Beau) Taylor, Chelsea and Jameson Hill, all of Munford; great-grandchildren Patrick and Lucas Sanderson, Langdon and Bryson Sanderson, and Kacie and Jessie Anderson, sisters Mary Catherine “Cat” (Blake)Harris of Talladega, and Dr. Elizabeth “Betsy” (Johnny Lee) Garrison of Munford. She was preceded in death by her beloved husband, Robert E. Jones; parents, Ernest and Mae Campbell; brother, Dr. William “Buddy” Campbell; sister, Ernestine Gaither,and grandchildren, Bryant and Courtney Hill. Sara was a lifelong resident of Munford. She graduated from Munford High School in 1954. She began working as a clerk at the Munford Post Office in 1969 and continued to work there until she retired as Postmaster in the early 2000s. After retirement, she opened and managed the Munford Weekly newspaper. She loved her hometown and worked tirelessly for incorporation to make sure Munford would not be annexed into surrounding cities. She also worked just as hard to make sure Munford children were able to have beautiful and competitive new schools. Most of her work was done behind the scenes, but neither project would have been successful without her efforts.She was a church of Christ Christian and made sure to let her light shine to those around her. She never met a stranger, she offered an ear to listen and a shoulder to cry on, she was a steadfast worker, a peacemaker, and would give someone her last dime if they were in need. She was also a loving wife, mother, grandmother,sister, and friend. Her family would like to offer a huge thank you to Alabama Hospice care for all their efforts to help them care for her at home.

A graveside service for Sara Campbell Jones, 85, of Munford, will be Sunday, May 2nd, 2021 at 2:00 pm, at Hillcrest Cemetery in Munford. Brother Mike Benson will be officiating. Mrs. Jones passed away in her home, Wednesday, April 28th, 2021. She... View Obituary & Service Information

The family of Mrs. Sara Campbell Jones created this Life Tributes page to make it easy to share your memories.

A graveside service for Sara Campbell Jones, 85, of Munford,...