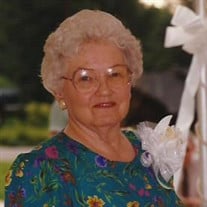 Mrs. Wallace "Jane" Horn, Sr Mrs. Horn, born June 30, 1921 in Anniston, Alabama, died July 10, 2020 in Birmingham. Her maiden name was Ruth O. Carroll and she was one of 6 children of the late Lon J. and Maude Carroll. She met Wallace in 1938 and they subsequently married in August 1939. Since Wallace was from Oxford, she and Wallace resided there until moving to Kirkwood By The River, a retirement center in Birmingham, in 2005. She and Wallace had 3 children, Diane, Jimmy and Wallace Jr. She was with the Oxford School system for 23 years. Additionally, she was quite active in Parent Teachers Association throughout the children’s school years, acquiring a total of 26 years in this organization. She also served in other school functions. She was active with the Oxford Library, and was on the Library Board for 22 years. While in Oxford, she was a member of First Baptist Church, and held various offices in her Sunday school class. She was preceded in death by her husband of 70 years, Wallace Sr. and granddaughter, Jessica Loyed. She is survived by her daughter, Diane Horn McCain and Jim; son, James Murroe Horn and Gail; son, William Wallace Horn, Jr. and Mona; grandchildren, Phillip McCain, Daniel Horn, Brandon Mullis and Jennifer Raggi. Graveside service will be at 11:00, Monday, July 13 at Oxford Memorial Gardens with Rev. Jim McCain officiating. Pall bearers will be family and friends. The family thanks the staff at Kirkwood By The River for their excellent care, and gives a very special thanks to Chaplain Richard Hannah, and Ricky and Mary Ann Stone. In lieu of flowers, memorials may be sent to First Baptist Church, Oxford. Personal condolences may be sent to www.millerfuneralhomeoxford.com.

The family of Mrs. Ruth Jane Carroll Horn created this Life Tributes page to make it easy to share your memories.