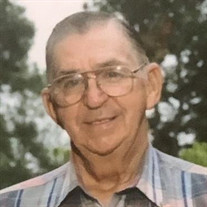 The funeral service for Robert Dowling Denson, 89, of Golden Springs, will be held at Anniston Bible Church on Tuesday, December 21,2021 at 12 noon with Bro. Bob St. John officiating. Visitation will be held 1 hour prior to the service. Graveside burial will be follow at Forest Lawn Garden. Born on December 28, 1931, Robert went home to be with his eternal Savior on Sunday, December 19, 2021 after a long illness. He was a quiet yet highly respected man, a lifetime servant of the church and he was filled with wisdom and faith from his loving Lord. He will always be remembered for his hard work, kindness, and eagerness to help others. Robert dearly loved his children and grandchildren calling them his greatest life’s accomplishment. Robert was a lifelong resident of Anniston. He served in the U. S. Army and was a veteran of the Korean War. After his military career, Robert worked for G. C. Colyer Construction for 22 years. He then worked at Ft. McClellan for 15 years where he was an exhibit model maker for training devices. He served as deacon and Sunday School Superintendent for many years. He was a boy scout and later served as an explorer leader. His greatest passion, aside from church, was gardening. He spent a lifetime growing vegetables and enjoyed giving them to family and friends. Left to cherish his memories are his loving wife of 65 years, Mary Ann Ross Denson, two children, Phillip Alan Denson (Barbara) and Lydia Denson Staples (Mark), five grandchildren, Dr. Robert Logan Staples (Savannah), Mary Grace Staples McDonald (Ross), Ross Franklin Staples, Olivia Tess Staples, Patrick Ryan Denson and many loved nephews and nieces. He is preceded in death by his parents, Marvin and Leona Denson, brother Reverend Paul Denson, and sister, Loarene Denson Long. One brother, Oliver Lanier Denson, survives him. Pallbearers will be Paul Ray (Sonny) Denson, Mike Alldredge, Jesse (Chip) Giddens, Darrell Waldrup, Phil Williamson and Jerry Gill. Honorary Pallbearers will be David Harris, David McKee, Gary Murphree, David Ross, Jesse Polk, Bob Jones, Andy Lamirande and Bill Braeckelaere. The Denson family expresses sincere thanks to String Fellow Hospital staff and doctors, Dr. Vance Moore and Dr. Mohammad Kamran for their wonderful care. Mrs. Denson also appreciates all the support, help, and care for Robert from extended family, neighbors and church members as well as prayers, cards and visits. In lieu of flowers, donations may be made to Anniston Bible Church, 3230 Coleman Road, Anniston AL 36207.

The funeral service for Robert Dowling Denson, 89, of Golden Springs, will be held at Anniston Bible Church on Tuesday, December 21,2021 at 12 noon with Bro. Bob St. John officiating. Visitation will be held 1 hour prior to the service. Graveside... View Obituary & Service Information

The family of Mr. Robert Dowling Denson created this Life Tributes page to make it easy to share your memories.

The funeral service for Robert Dowling Denson, 89, of Golden...