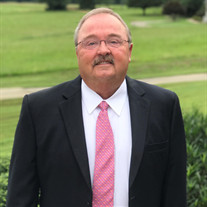 A funeral service for Bro. Rick Reaves, 71 of Oxford, will be on Sunday, April 18, 2021 at 4:00 pm at Mt. Zion Baptist Church with Donnie Cates and Bro. Garry Ragsdale officiating. A burial will follow the service at Maple Grove Cemetery. The family will receive friends on the same day from 1:00 pm until the time of the service. Bro. Rick went home to be with his Lord on April 15, 2021, at his home surrounded by his loving family. He is survived by his wife of 51 years, Janice Reaves; children, Chris Reaves (Amy) and Gina Evans (Lance); grandchildren, Berit Lovelady, Kaylee Reaves, Holland Lovelady, Brynne Reaves, Brock Reaves; sister, Gail Cates (Donnie), and a host of extended family members and friends. He is preceded in death by his parents, Lee and Frances Reaves. Pallbearers will be Gerald Cates, Greg Ragsdale, Curry Cates, Lott Cates, Owen Gilbert, and Jadon Gilbert. Honorary pallbearers will be pastors who have served alongside him throughout his many years of ministry. Bro. Rick Reaves (a.k.a. Poppy) was a dedicated husband, father, grandfather, brother, uncle, and friend. In 1970 he began his ministry as a youth pastor at Antioch Baptist Church, where he remained for the next 7 years. In 1977 he answered the call to become the youth minister at Moore Avenue Baptist Church (which later changed its name to Hill Crest Baptist Church). On October 18, 1987, in a service at Hill Crest Baptist Church, Bro. Rick announced his call to preach the gospel. He remained at Hill Crest until 2017, serving as associate pastor and youth pastor for a total of 15 years, and as its senior pastor for 25 years. During his tenure at Hill Crest, he baptized 3,471 people. - What an amazing legacy! Since his retirement in 2017, Bro. Rick has enjoyed spending time with his family, fishing, working on his farm, and preaching in churches throughout the South. He loved his family fiercely! He was married to his high school sweetheart for 51 beautiful years, and their marriage has been an example to all who know them. He could often be found at the ballfield, the football games, the basketball gym, the golf course, or wherever his children or grandchildren happened to be playing or performing. - He never missed a moment with any of them. They knew that if they looked toward the stands, there he would be - smiling and cheering them on. Although he has passed, they know that he is still smiling and cheering them on today. Bro. Rick’s infectious laugh, big smile, quick wit, and charm will be missed by all who knew him. He was generous and quick to show love to all around him. There is no way to know on this side of Heaven, just how many lives were forever changed because of his ministry. Our hearts are broken, but our spirits are rejoicing that he is now worshiping at the feet of his Savior! - And no doubt eating a big bowl of banana pudding!

A funeral service for Bro. Rick Reaves, 71 of Oxford, will be on Sunday, April 18, 2021 at 4:00 pm at Mt. Zion Baptist Church with Donnie Cates and Bro. Garry Ragsdale officiating. A burial will follow the service at Maple Grove Cemetery. The... View Obituary & Service Information

The family of Bro. Rick Reaves created this Life Tributes page to make it easy to share your memories.

A funeral service for Bro. Rick Reaves, 71 of Oxford, will be...