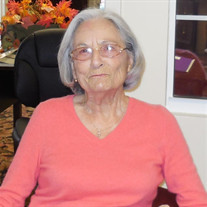 A funeral service for Mrs. Mettie Lee Lipham, 92, of Oxford, will be on Tuesday, September 25, 2018 at 2:00 pm in the chapel of Miller Funeral Home with Rev. Buddy Nelson officiating. The family will receive friends on the same day from 1:00 pm until service time. Burial will follow the service at Oxford Memorial Gardens. Mrs. Lipham passed away on Saturday, September 22, 2018 at Autumn Cove Assisted Living. She leaves behind to cherish her memory her son, Kenneth Lipham (Anita); daughter, Sandra Lipham Hubbert (Jim); grandchildren, Bryan Lipham (LeAnne), Brent Hubbert (Kelly), Brandi Galloway (Chris) and Brad Lipham (Divina); great grandsons, Carson, Brody, Cade, and Eli; brothers in law, John Lipham and Jerry Lipham (Jo), and a host of nieces, nephews, and cousins. She is preceded in death by her husband of 64 years, K.V. Lipham; parents, Paul and Mettie Merrill, and four siblings, Emmett Merrill, Dura Swafford, Frances Kennedy, and Martha (Tiny) Blanton. Mrs. Lipham was a native of Cleburne County and a resident of Calhoun County for most of her life. She retired from First City National Bank in Oxford and was a member of the First Baptist Church of Oxford. She was a member of Augusta Smith #427 Order of the Eastern Star and a member of the Pink Ladies Auxiliary at RMC. She was a devoted mother, grandmother and great grandmother who had a heart for cooking. Pallbearers will be Bryan Lipham, Brent Hubbert, Brad Lipham, Chris Galloway, Carson Lipham and Vaughn Lee. Honorary Pallbearers will be Brody Hubbert, Cade Galloway, and Eli Hubbert. The family appreciates the loving staff and friendships she had Autumn Cove and the excellent care shown to her by the hospice staff at AlaCare, especially Kristin Rivers. In lieu of flowers, the family request that you make a donation to your favorite charity.

A funeral service for Mrs. Mettie Lee Lipham, 92, of Oxford, will be on Tuesday, September 25, 2018 at 2:00 pm in the chapel of Miller Funeral Home with Rev. Buddy Nelson officiating. The family will receive friends on the same day from 1:00... View Obituary & Service Information

The family of Mrs. Mettie Lee Lipham created this Life Tributes page to make it easy to share your memories.