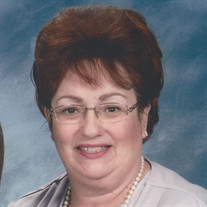 A visitation for Mrs. Mary Charlene Bright, 71 of Eastaboga, will be on Thursday, June 18, 2020 from 4:00 pm – 6:00 pm at Miller Funeral Home. A burial will follow on Monday, June 22nd in the Alabama National Cemetery in Montevallo, Alabama. Mrs. Bright passed away on June 15, 2020 from complications due to end stage renal disease. She is survived by her husband of 53 years, Charles ‘Charlie’ Edward Bright; daughters, Kristin Johnson (Neil) and Kammie Chambliss (Joey); grandchildren, Mallory Stringer, Lauren Johnson, Lindsey Johnson, and Logan Johnson; nieces and nephews, April Audet (Jason), Jonathan Shaver (Christina), Mark Rivera, Ern Mondabaugh (Anissa), Greg Mondabaugh, and great nephews, Sean Mondabaugh, Bryan Mondabaugh, Garrett Faucett, Damon Moore, Jayden Audet, James Shaver, and George Shaver. She is preceded in death by her parents, Charles and Mary Alice Bowers; sisters, Debbie Shaver, Cheryl Jennings, and Violet Holland. Charlene loved her family fiercely. Her proudest achievements were her roles as mother and grandmother. She was known to her four grandchildren as Nonna. She was a caregiver to each of them as infants – while her daughters worked. She was incredibly proud of her daughters and her grandchildren and she would tell anyone willing to listen - all about them. She always told her grandchildren that she loved them “to the end of the numbers” and she meant it. She was a woman of many talents. She loved to sew, knit, and crochet. Many gifts that she gave were handmade, with lots of love. Her family is comforted by the fact that she is no longer suffering, and she is in the presence of her Savior. Honorary pallbearers will be Logan Johnson, Jonathan Shaver, Mark Rivera, Ern Mondabaugh, and Greg Mondabaugh. Donations in her honor may be made to the National Kidney Foundation https://www.kidney.org/donation.

A visitation for Mrs. Mary Charlene Bright, 71 of Eastaboga, will be on Thursday, June 18, 2020 from 4:00 pm &#8211; 6:00 pm at Miller Funeral Home. A burial will follow on Monday, June 22nd in the Alabama National Cemetery in Montevallo, Alabama. Mrs.... View Obituary & Service Information

The family of Mrs. Mary Charlene Bright created this Life Tributes page to make it easy to share your memories.

A visitation for Mrs. Mary Charlene Bright, 71 of Eastaboga,...