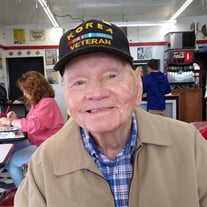 Marvin Eugene “Buster” Dover, 91 of Sylvania, passed away peacefully at his home on January 22, 2020 after a brief illness. He was a former resident of Oxford and Anniston before moving to Sylvania after the passing of his loving bride of 67 years Lucille in August 2019. He is survived by their only son Steve (Metha) Dover of Sylvania, AL,grandsons Brandon Dover and Jacob Dover of Oxford, one granddaughter Kaylee Sartin of Lafayette, GA, one great-grandson Wyatt Hineman, of Lafayette, GA, and two sisters, Mildred Thornton of Oxford, AL and Annie Maude Thornton of Cleveland, OH. He was preceded in death by his wife Lucille Dover, his parents John S. and Annie R. Dover, brothers Jones Dover and Harold Dover, sisters Nellie Whitman, Lorene Carey, Erma Bean, and Josie May Bean, and one grandson Noah Sartin. Mr. Dover was a US Army Veteran serving during the Korean War. He served proudly as a member of the 3rd Division, 39th Field Artillery Battalion and was honorably discharged from active service on July 13, 1951. During his time of service, he was awarded the Japan Occupation Medal, Korean Service Medal with 1 Bronze Campaign Star, and 1 Overseas Stripe. In the later years of his life he was awarded the Ambassador for Peace Medal given by the Ministry of Patriots & Veterans Affairs of the Republic of Korea. Mr. Dover was a former member and deacon of Blue Springs Baptist Church and Grace Baptist Church, both in Oxford. After moving to Sylvania, he attended Sylvania Baptist Church when his health permitted. At the time of his death he remained a member of Parker Memorial Baptist Church in Anniston, AL. He also served as Sunday School teacher and music minister when called upon. Mr. Dover was a wonderful loving husband, dad, and Paw-Paw. He loved his family tremendously but his face would light up when he got a visit from one of his grand kids or his great-grandson Wyatt. Visitation will be Sunday, January 26, 2020 from 12:00pm – 2:00pm at Miller Funeral Home in Oxford, AL. His service will begin at 2:00pm in the chapel with Rev. David Starling and Steve Dover officiating. A small graveside ceremony will take place at Anniston Memorial Gardens with military honors following the chapel service.

Marvin Eugene &#8220;Buster&#8221; Dover, 91 of Sylvania, passed away peacefully at his home on January 22, 2020 after a brief illness. He was a former resident of Oxford and Anniston before moving to Sylvania after the passing of his loving... View Obituary & Service Information

The family of Mr. Marvin Eugene "Buster" Dover created this Life Tributes page to make it easy to share your memories.