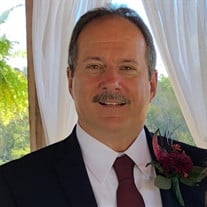 Often described as a “treasure”, Mark Joseph Cova was suddenly and unexpectedly called to his Heavenly Home on Saturday, October 2, 2021. He was 60 years old. Born on June 25, 1961 in Anniston to parents, Antone and Helen Cova, Mark spent his life living and working in our area. Upon graduation from Anniston High School in 1979, Mark found work at the Northeast Alabama Regional Medical Center as a carpenter’s assistant. He developed a passion for his newfound vocation and soon became quite proficient in his work. He learned everything he could about his job and soon began to advance in the ranks to become Director of Plant Operations. Staff at RMC came to depend on Mark for his incredible knowledge of the facility. Always the gentleman, he assisted all in any way possible and always with a willing spirit. “In the 38 years that I have known him, no one ever said anything bad about Mark Cova,” said a prominent RMC physician. “He was highly respected here and across the state and we will miss him greatly.” Over everything, Mark cherished his family. He loved them ceaselessly and unconditionally and provided for them untiringly. Nothing was more important. “He loved me ‘hard,’” said one of his children recently and continued by saying that he “made an impact on every person with whom he came in contact.” He was an avid outdoors-man and enjoyed more than anything communing with nature as a hunter, fisherman, hiker, camper, and just being one with the great outdoors. He was a SERIOUS Alabama football fan and a lover of all sports. Survivors include his wife, Kelly; children, Katie Cova (Cody Barnes), of Munford, Holly Nichols (DaKota), of Oxford, Zoey Morgan (Aubrey), of Jacksonville, and Myles Chamblee (Meagan), of Boaz; grandchildren include: Addie Bowden, Maebry Chamblee, and Micah Chamblee. He had two brothers, Michael Cova (Lanelle), of Oxford, and Alan Cova (Marcia), of Deatsville. His sisters include Kala Tuner of Heflin, Gina Cova, of Oxford, and Tina Younger (Tom) of Scottsboro. There are numerous nieces and nephews and great nieces and nephews. Mark was a certified Healthcare Engineer and a member of the Alabama Society for Healthcare Engineering. He received the RMC Hero Award. Family will gather at Miller Funeral Home in Oxford on Wednesday, October 6, where friends will be welcomed at 5:00 p.m. Visitation will conclude at 8:00 p.m. Funeral services will be held at Miller Funeral Home on Thursday, October 7, at 2:00. Pallbearers will be Patrick Donahey, Chad Watts, Phil McWilliams, Josh Garmany, Terry Bonner, and Lue Jackson. Mark Cova lived his life with love, zeal, and passion and with a fierce determination to do all things well. He accomplished and surpassed that goal many times over and we will miss him forever.

Often described as a &#8220;treasure&#8221;, Mark Joseph Cova was suddenly and unexpectedly called to his Heavenly Home on Saturday, October 2, 2021. He was 60 years old. Born on June 25, 1961 in Anniston to parents, Antone and Helen Cova,... View Obituary & Service Information

The family of Mr. Mark Joseph Cova created this Life Tributes page to make it easy to share your memories.

Often described as a “treasure”, Mark Joseph Cova was suddenly...