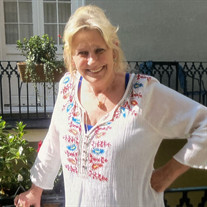 It is with deep sadness to announce the passing of Marilyn Ann Jones on April 16, 2022, at the age of 68. She was born in Esslingen, Germany on January 20, 1954, at her grandmother’s home. She was preceded in death by her father, Harold R. Jones, and mother, Melanie E. Jones. Marilyn was a military dependent and lived throughout the south, Nevada, Germany, and England. She moved to Anniston in 1975 and lived the remainder of her life in Anniston and Oxford. She was a 1972 graduate of New Bern High School in North Carolina. She received her Associate Degree in Business from Craven County Community College in New Bern in 1974. Marilyn loved Kmart and began a 29-year career there in 1975. She retired as the Electronics Department Manager. During the Halloween season, she dressed up as the Kmart witch and handed out candy to children. After her retirement from Kmart, she went on to work for the State of Alabama, ABC Board as a Sales Associate and retired in April 2021. Marilyn leaves behind her beloved daughter, Erika Eve Phillips (Oxford, AL); sister, Donna Jones Reynolds (Oxford, AL); niece, Samantha Rose Reynolds, CRNP (Birmingham, AL); brother-in-law, Dr. John K. Reynolds (Oxford, AL); cousin, John Howard Jones (New Bern, NC), and an aunt, Medi Wurth (Cleveland, OH). She enjoyed shopping at Center of Hope and Shop 24 on Monday evenings. She loved spending time at the beach and enjoyed collecting seashells. A private family memorial will be held in Panama City Beach, Florida in July. Marilyn was an exceptional mother, sister, and aunt. Aunt Mare was always the life of the party. Our family is heartbroken and will miss her so much, but she will live on through our many wonderful memories.

It is with deep sadness to announce the passing of Marilyn Ann Jones on April 16, 2022, at the age of 68. She was born in Esslingen, Germany on January 20, 1954, at her grandmother&#8217;s home. She was preceded in death by her father, Harold... View Obituary & Service Information

The family of Marilyn Ann Jones created this Life Tributes page to make it easy to share your memories.

It is with deep sadness to announce the passing of Marilyn Ann...