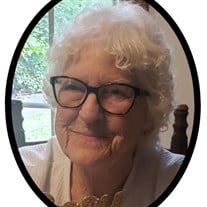 Louise H King, 87, passed away Monday February, 7th at Stringfellow Memorial Hospital. Mrs. King was a life long resident of Oxford. Louise was born on September, 25th 1934, she was the third child out of seven to her parents Elijah and Alice Hill. On December 6th 1976 she married her best friend and soul mate Robert where they lived happily married for 45 years. As a life long resident of Oxford she made many friends over the years through her employment at Calhoun Drug, then later through her own business where she traveled the state selling Alabama Clay Figurines that she hand made. When she wasn’t enjoying a ride through the country side you would find her quilting, crocheting, doing cross word puzzles, word searches, or her favorite jigsaw puzzles. She also frequently enjoyed her girls night out with her niece Judy and sister Jane playing bingo. Louise loved the Lord and enjoyed worship along with fellowship at Cheaha Baptist Church for many years. Giving her time and efforts to helping those in need through service was also a passion of hers. She was a member of the Pilot Club of Oxford for over 20 years until they disbanded where she then became a lifetime member of Pilot International. This service organization meant so much to her not only through the work they did but the friendships she made with fellow Pilot members across the country. Later on she joined the Anniston Emblem Club where she continued to give many years of service for Veterans and families in need in the Calhoun and surrounding areas. The members of the Pilot Club and the Emblem Club we’re more than just friends to her they were family. Louise never met a stranger she was always bubbly and made friends so easy. Louise was proceeded in death by her parents Elijah and Alice Hill, siblings Rudolph Hill (Brother), Galen Hill (Brother), Tommy Hill (Brother), Dorothy Hanks (Sister), and her beloved husband Robert King. She leaves behind to cherish her memories her daughters Meghan (Josh Clark), Lora (Rich Henry), Lillian (Jim Mitchell). Five grandchildren Jessica, Jonathan, Nolan, Connor, and Owen. Six great grandchildren Christopher, Alexander, Jullian, Lyla, Damitre, and Sebastian. Sisters Jane Freeman and Barbara Knaack along with several nieces, nephews, extended family members, and friends. Celebration of Life services for Mrs. Louise H King will be Saturday February 19th at 2:00 PM at Cheaha Baptist Church in Oxford (600 County Line Rd). Pastor Steve Johnson will be officiating. There will be a fellowship dinner with the family following the memorial service. Miller Funeral Home, Cremation, and Aquamation Center Is handling her arrangements. Casual dress is requested for the service by the family. A special thanks to the ER and ICU staff at Stringfellow Memorial Hospital for there care and compassion.

Louise H King, 87, passed away Monday February, 7th at Stringfellow Memorial Hospital. Mrs. King was a life long resident of Oxford. Louise was born on September, 25th 1934, she was the third child out of seven to her parents Elijah and Alice... View Obituary & Service Information

The family of Louise H King created this Life Tributes page to make it easy to share your memories.