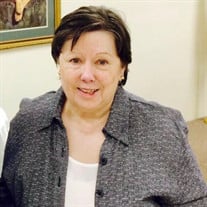 Linda Jackson was born on December 28, 1951 to Ray Palmer Reid and Ellen Ballard Reid in Tryon, NC. She entered heaven on February 1, 2020 after a brief hospitalization. She is survived by her husband of 45 plus years, Wayne P. Jackson of Heflin, AL and son and daughter-in-law Will and Haley Jackson of Fultondale, AL. She is also survived by sisters Kay (Adolph) Atkins of Saluda, NC, Pam Bowlin of Hendersonville, NC, and Cheryl (Tommy) Howell of Fletcher, NC; mother-in-law Oliva Jackson of Clyde, NC; sister-in-law Karen Lawrence of Waynesville, NC; care-giver, neighbor and special friend Alta Connell of Heflin, AL; one niece and three nephews. In addition to her parents, she is preceded in death by father-in-law William “Paul” Jackson and brothers-in-law William “Troy” Ledford, Mike Bowlin and Floyd “Tim” Lawrence. Linda grew up in Lincolnton and Saluda, NC. She was a graduate of Saluda High School where she was president of the student council and the captain of the girls’ basketball team. She earned a B.S. in elementary education from Tift College (Forsyth, GA). where she was senior class president. Linda taught elementary school in North Carolina for five years before returning to the University of North Carolina at Chapel Hill, earning a masters’ degree in Speech Language Pathology. She was a school speech language pathologist in Davie County, North Carolina and Anniston, Alabama for thirty-four years. She served as the Children’s Minister for A Prayer Connection Ministries, Oxford, AL for over twenty years. As an educator and pastor Linda positively impacted the lives of countless children. She particularly enjoyed working with early school-aged children, with second graders being her favorite. A celebration of life led by Will Jackson and Rev. Julie Turner will be held on Saturday, February 8 at 2PM at the Toby Miller Chapel at Miller Funeral Home, 50 Hamric Drive, Oxford, AL with visitation at noon. A private interment for family and close friends will be held at Forest Lawn in Golden Springs. In lieu of flowers, please send gifts to her favorite charities: Baptist Children’s Home (ABCH, P.O. Box 361767, Birmingham, AL 35216-1767) or Samaritan’s Purse (PO Box 3000, Boone, NC 28607). The Jackson family would like to thank the physicians, nurses and staff of NEARMC for their excellent care, especially the Emergency Department, ICU, 8th Floor, and 4th Floor West.

Linda Jackson was born on December 28, 1951 to Ray Palmer Reid and Ellen Ballard Reid in Tryon, NC. She entered heaven on February 1, 2020 after a brief hospitalization. She is survived by her husband of 45 plus years, Wayne P. Jackson of Heflin,... View Obituary & Service Information

The family of Linda Jackson created this Life Tributes page to make it easy to share your memories.