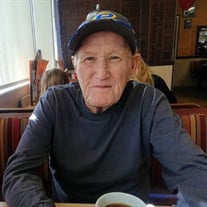 Larry “Popper” Wilson Austin, 71, passed away Tuesday, January 21st, 2020 at his home with his devoted family by his side. Funeral Services will be held Saturday, January 25th, 2020 at 2:00 pm at Miller Funeral Home in Oxford. Brother Larry Gardner and Brother Carlos Farmer will officiate. Burial will follow afterwards at Dogwood Lane Cemetery. Pallbearers will be Zachary Kiser, Anthony Kiser, Trent Dickeson, David Connor, Wayne Connor and Billy Harrison. Larry was preceded in death by his parents Herman and Lurleen Connor Austin; his brother Gene Austin; and his sister Martha Hembree. He was born and raised in Oxford, where he attended Oxford city schools. He was a proud graduate of the Oxford High School class of 1967. Larry was the first person in his family to receive his high school diploma. Larry met the love of his life Irma Harrison when relatives introduced them. Larry and Irma dated for one month, before Larry decided he better marry Irma before she slipped away. They got married in her grandparents' house on July 25th, 1969 and were still lovebirds 50 years later. One year after they were married, they welcomed their daughter Paula into their family. When their daughter April was born 2 years later, their family was complete. After Larry graduated from high school, he started his career working in a service station, but he wanted more for his family. He actually worked two jobs to allow his daughters to participate in activities. He always managed to attend the activities to show support for his daughters. He got his CDL license and started driving for Tyson, then finally BR Williams. In his later years, Larry moved to Piedmont and became a huge Piedmont Bulldog fan. He loved attending football games and cheering on his team. He could be counted on to find the best fishing spots in the state, but his favorite activity was spending time with his grandkids. He loved supporting them in any activity that they enjoyed. He was their biggest fan. Larry is survived by his loving wife of 50 years Irma Austin; his daughters Paula Dickeson and her husband Doug, April Weatherbee and her husband Scott; his grandchildren Zachary Austin and his wife Cayli, Trent Dickeson, Hali Dickeson, Anthony Kiser, Abbie Dickeson, Emma Weatherbee and Eli Weatherbee and several cousins. In lieu of flowers, the family would like donations to go to Anniston Cancer Center or Venecia’s Foundation in Piedmont. The family will receive friends at Miller Funeral Home from 12:00 pm on Saturday until the start of the service. To order flowers, please visit www.millerfloristandgifts.com or call 256-835-0911

The family of Larry 'Popper' Wilson Austin created this Life Tributes page to make it easy to share your memories.