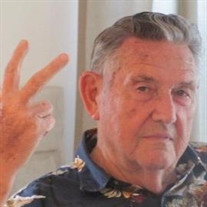 A funeral service for Mr. Kyle Douglas Smith, 93 of Bynum, will be on Wednesday, December 23, 2020 at 12:00 pm in the Toby Miller Chapel at Miller Funeral Home. Chaplain Dave Bolin will be officiating. The family will receive friends on the same day from 11:00 am until the time of the service. Mr. Smith passed away on December 20, 2020 at his home. He is survived by his wife of 60 years, Rubye Smith; daughters, Nancy DeVere (Jim) of Buena Park, CA, Teri Grant (Greg) of Waverly Hall, GA, Toni Smith of Oxford, AL; grandchildren, Jamie Bonin (Mike), Natalie Mannara, Samantha Mitchell (Matt), Chelsea Captan (Rashad), Davey Leverett (Breeana), Daniel Leverett, Ben Grant; 8 great grandchildren; sister, Joyce Boyer (Dave); sisters in law, Teresa Buttke, Charlene Megginson (Mickey), and his 21 nieces and nephews. He is preceded in death by his parents, Brady and Mary Smith of Bristol, TN. Pallbearers will be Bobby Buttke, Andrew Buttke, Donald Cash, Robby Buttke, Greg Grant, Ben Grant, Davey Leverett and Daniel Leverett. Mr. Smith served proudly in the United States Air Force and retired as a MSGT from the Air National Guard, 117TH Tactical Reconnaissance Wing. He volunteered many years with the Civil Defense. He was a 33rd Degree Mason with the Hartwell Masonic Lodge in Oxford, Alabama. Mr. Smith enjoyed meeting his friends at Jack’s every morning, solving the worlds problems over coffee and breakfast. He loved listening to old country music, particularly George Jones, Chet Atkins and Patsy Cline. He liked tending to his garden and had the proverbial green thumb. He spent many hours on the water fishing with his daughters and grandchildren. Mr. Smith was a die-hard Alabama football fan, Roll Tide! Mr. Smith was led in accepting Christ as his Lord and Savior by his grandson on July 11, 2020. The family would like to extend a heartfelt thank you to SouthernCare New Beacon Hospice for their exceptional care and to everyone that has prayed or called. We’ve felt your love.

A funeral service for Mr. Kyle Douglas Smith, 93 of Bynum, will be on Wednesday, December 23, 2020 at 12:00 pm in the Toby Miller Chapel at Miller Funeral Home. Chaplain Dave Bolin will be officiating. The family will receive friends on the... View Obituary & Service Information

The family of Mr. Kyle Douglas Smith created this Life Tributes page to make it easy to share your memories.

A funeral service for Mr. Kyle Douglas Smith, 93 of Bynum, will...