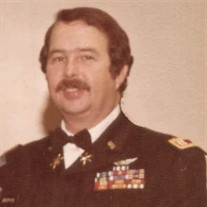 Captain (Ret) Kenneth Griffith of Anniston, AL passed away peacefully on the evening of July 5, 2019. A Full Military Honors graveside service will take place at 10:00 a.m. on Saturday, July 20, 2019, at Crook Cemetery, 319 McCullars Lane, Ohatchee. Kenneth is survived by his beloved wife of 62 years, Sandra (Bowman) Griffith; three daughters, Keli Griffith, Kendra G. Hollaway, and Kerri G. Ladd; seven grandchildren, F. Griffith West and wife Monica of Pinson, Victoria E. Herndon and husband Landis of Mobile, Francis E. West, III and wife Rebecca of Mobile, Silas G. Griffith and wife Whitney, Hannah A. Hollaway, Caleb M. Griffith and wife Yaba of California, and Zachary M. Griffith; eleven great-grandchildren, Kenneth Logan, Jordyn, Korban, Lawson, Gabriel, Cameron, Aubrey Kassandra, Ariella, Malik, Adrian, and Ava; one brother Ted J. Griffith and wife Nancy, one sister, Tuajuana G. Tucker and husband Terry; as well as several loved nieces, nephews, and cousins. He was preceded in death by his parents, Oscar U. and Elna (Lawler) Griffith; a daughter Kassandra Griffith; and a sister Theresa G. Schuler. Capt. Griffith was born in Blue Mountain, AL on January 29, 1940, and was reared in Anniston, AL. Following his graduation from Anniston High School, he joined the U.S. Army. Beginning his career with the Military Police at Ft. McClellan, AL, he was stationed throughout the Southeast and in Europe. He was very proud of his military service; rising in rank and attaining his goal to become a Rotary Wing Aviator. One of his most cherished titles was Cobra Leader, the flight call-sign bestowed upon him by his brothers-in-arms. His final station was in Cu Chi, northeast of Saigon, with the 25th Infantry Division. On the 9th time he was shot down by the enemy, while defending his load of wounded casualties, the front bubble of the helicopter was shattered by gunfire, grievously wounding both himself and his co-pilot who passed out. Griffith fought on and succeeded in flying his disabled helicopter back to camp, accomplishing a controlled crash landing before succumbing to his own wounds. For his heroism in this battle Capt. Griffith was awarded the third highest military honor, the Silver Star. Griffith was also awarded the Distinguished Flying Cross with Oak Leaf Cluster after a seven-hour helicopter battle with Viet Cong guerillas. He was recommended for the Medal of Honor by his commanding officer. During his military service he also received the Air Medal with 6 Oak Leaf Clusters, Purple Heart with 1 Oak Leaf Cluster, Army Aviator Badge, National Defense Service Medal, Vietnam Campaign Medal with three stars, Vietnam Service Medal, Good Conduct Medal with two loops, and the National Defense Medal. After completing physical rehabilitation due to the loss of his leg in combat, Capt. Griffith officially retired and returned to his hometown of Anniston, AL. He was afforded the signal honor of receiving an invitation to address both the Alabama House of Representatives and the Alabama Senate for recognition from the Floor. Griffith chose Jacksonville State University to continue his education where he completed a Bachelor of Science in Psychology in 1974, a Master of Public Administration in Criminal Justice in 1975, and a Master of Science in Personnel Counseling in 1976 from Jacksonville State University. He took an active interest in local politics, mentored by Senator Bill Nichols; even running for the Alabama House of Representatives in 1970, and became a Master Mason in a local Anniston Lodge. Griffith was a long-time member of Golden Springs Baptist Church where he served as Deacon, Sunday School teacher, Youth Leader, and participated in many mission trips with Carpenters for Christ. He was a voracious reader and avid sports fan, rarely missing the chance to cheer for his treasured Univ. of Alabama football team. Told that the loss of his leg would limit his physical capabilities, he took great satisfaction in proving the doctors wrong. He went on to teach his children how to water and snow ski, playing and coaching them in basketball, baseball, football, volleyball, Motor-Cross riding, horseback riding, etc. There were few sports or physical activities he did not participate in as he proved to his delighted daughters that he, and they, were capable of accomplishing anything. Lovingly referred to as ‘The Captain’ or ‘Cap’ by children, grandchildren and their friends, he will be forever remembered as a loving and devoted man. He never met a stranger, and his charm, inclusiveness, and loyalty earned him life-long friends. His greatest passion in life was his family and God, never missing an opportunity to talk about his Savior nor brag about his loved ones. He will never be forgotten.

The family of Captain Kenneth Griffith created this Life Tributes page to make it easy to share your memories.