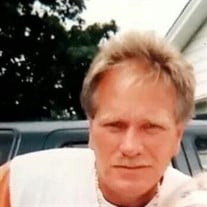 Kenneth Floyd Atteberry known as “Kenny” to family and friends, age 62, passed away on May 31, 2020. He was an Alabama native and resident of Anniston, AL. Kenny was a graduate of Saks High School – Class of 1976. He was known for his outgoing personality and athleticism. He excelled in high school sports. He had the opportunity to further his love for football, basketball and baseball but instead he chose another career avenue. His outgoing personality landed him a job in sales. Kenny enjoyed the outdoors – being anywhere close to the water. He enjoyed fishing and at one point worked as a lifeguard on the beaches of Panama City. Kenny is preceded in death by his father, Herman Atteberry, Sr; mother, Maurine Elliott Atteberry both of Anniston; his son, Joshua Atteberry of Oxford, AL; his older brother, Michael Wayne Hill of Oxford, AL his grandparents and several aunts and uncles. He is survived by two daughters, Amy Evans (Joshua) of Clanton, AL and Kaylie Norris of Oxford, AL; two grandchildren; three sisters, Marilyn Dianne Heit of Anniston, AL, Debbie Atteberry Fields (Thomas) of Dinwiddie, VA; Donna Atteberry Dowlen (Charlie) of South Chesterfield, VA; his younger brother, H Floyd Atteberry, Jr (Dr. Richard Kauffman) of Atlanta, GA; one aunt, Zeith Elliott of Ashland, AL. and a cousin, Glenn Story of Birmingham, AL. He was blessed with many successful nieces and nephews. Miller Funeral Home in Oxford, AL handled his arrangements. According to his wishes, his remains were cremated. A memorial will be held at a later date for immediate family and close friends.

The family of Kenneth Floyd Atteberry created this Life Tributes page to make it easy to share your memories.

Kenneth Floyd Atteberry known as “Kenny” to family and friends,...