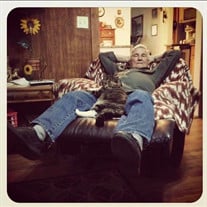 John Harvey Storey, 82, of Choccolocco, passed away on Tuesday, August 18, 2020 at Stringfellow Memorial Hospital. Mr. Storey is preceded in death by his parents Jim and Pearl Storey; infant son John Scott Storey; brothers, James Storey, Donald Storey and sister, Dorthy Carden. He is survived by his wife of 59 years Veronica Storey; children, Kelley (Dennis) Catoe, Holley (Philip) Rowe, Mykel (Tiffany) Storey and Britny (Don) Caverly; sisters, Helen Geotz, Rosanne Thompson; grandchildren, Shelby Brodeur, Haley (Kade) Shaw, Sara Catoe; nephew Chris (Angie) Hill and several great grand children. Mr. Storey gave his life to the Lord Jesus Christ as a teenager and was a founding member of Choccolocco Community Church and an active church member until his health would no longer allow. Mr. Storey served his country proudly in the United States Air Force. He retired from the Calhoun County road department and then later retired from the Anniston Army Depot after 26 years of service. He loved working in his wood shop on projects for his family, caring for his grand children and Alabama football. When not in his wood shop you could find him working word puzzles in his favorite chair with his cat, Kitty, sleeping in his lap. He loved his family well and we are grateful to have been able to call him husband, Dad and Pop. The family thanks all of the caretakers he had at the end of his life. The family will have a private graveside service on Thursday, August 20, 2020. Pall bearers will be Chris Hill, Dennis Catoe, Philip Rowe, Mykel Storey, Seth Choron and Charles Turner.

The family of Mr. John Harvey Storey created this Life Tributes page to make it easy to share your memories.

John Harvey Storey, 82, of Choccolocco, passed away on Tuesday,...