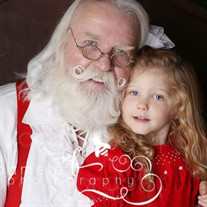 Jack passed away on March 15th, but because of the virus the celebration was delayed. Jack, Papa Jack, Santa Jack, John York was born in Cincinnati, Ohio on October 28, 1942. He served in the United States Navy from 1960 to 1966. Most of his duty was on the USS Bushnell stationed in Key West, Florida. He stayed in Florida after his tour was up and went to work for Florida Power and Light Utility in Sarasota, Fl. He retired because of his health in 1997 after 37 years. Jack loved to fish. His main enjoyment was to mullet fish with his buddy Dick Mucluster. They would smoke fish and go into the neighborhood and give out the fish to the seniors who loved it. Jack became a wood carver with his good friend Tom Roberson. He enjoyed carving animals and then became a Santa carver using cypress knees. He was featured on Absolutely Alabama and The Birmingham News did a feature article on his carvings. He would spend many hours in his carving room. Jack started carving canes with the American Eagle for the handle. He would carve canes and give them to the wounded soldiers. He has a cane in 40 of the states. He got such a great satisfaction out of carving. He did this until his hands would no longer allow him to. In the later years, Jack became Santa Jack. He loved going to homes, nursing homes, foster homes, the Sheriff Kids, Oxford Police Station, and doing photos for photographers. He loved being out in public and kids would come up to him and say, "Hey Santa Jack". This was anytime of the year. He always carried candy canes, not just around Christmas time. He loved telling kids the real meaning of Christmas. He was a member of the Cotton Patch Santa's. Jack and Belinda loved cooking for Wednesday night suppers and church functions at Grace Baptist Church in Oxford. Jack leaves his wife, Belinda (Granny B.), they were a team. They did everything together. He had written an open letter for the past 20 years to her; she did not know about this. He told her about 2 weeks before his passing. Such a beautiful gift to her. Jack also leaves behind 3 children, David Supplee (Sharon) of Moody, Al; Tara Bensaid (Amine)of Myakka, Fl; Sean York (Riley)of Gainesville, Fl.; Four grandsons, Ami Bensaid of Bradenton, Fl; Eiden Bensaid of Myakka, Fl; Ian Supplee of Moody, Al and Kobe Slaughter of Anniston, Al. One brother Terry York of Cincinnati, OH and several nephews. Jack loved spending time with his family, especially his grandsons. A celebration of life will be June 28, 2020 at 3:00 pm until at Cane Creek Community Center, 77 Justice Ave Anniston, Al 36205. (Because of the COVID-19 virus, you are asked to bring lawn chairs if you attend the celebration) The family has requested instead of flowers that a donation be made to Calhoun County 4-H Wildlife Club, Alabama 4-H Foundation 244 Duncan Hall at Auburn University Auburn, Al 36849.

Jack passed away on March 15th, but because of the virus the celebration was delayed. Jack, Papa Jack, Santa Jack, John York was born in Cincinnati, Ohio on October 28, 1942. He served in the United States Navy from 1960 to 1966. Most of his... View Obituary & Service Information

The family of Mr. John "Jack" Esmond York Jr. created this Life Tributes page to make it easy to share your memories.

Jack passed away on March 15th, but because of the virus the...