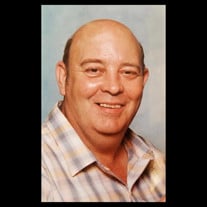 John Culver Harmon, 79, of Munford, passed away peacefully at home with loved ones by his side. He is preceded in death by his parents John Odell and Daisy Lee Harmon and great granddaughter Evelyn Mae Haynes. Left to cherish his memory are his wife of 57 years, Faye Clegg Harmon, daughters Cindy Haynes (Tim), Christy Dempsey (Eddie), Connie Stancil (Mark), grandchildren Jay Haynes (Melissa), Tyler Haynes (Emily), Blake Haynie, Brett Haynie (Shelby), Payne Stancil, Addie Lee Stancil, Evan Stancil, Summer Greenwood (Chase), Garrett Dempsey and six great grandchildren with the seventh due in September. John is also survived by his brother, George Jerome Harmon, Sr. (Connie), and sister, Donna Sue Kendrick (Roy) and numerous nieces and nephews. Noted for his love for his family, wife, girls and grandchildren, John’s family meant the world to him. He was much adored by all who really knew him. He was known as John, Culver, Big John and Harmon but his most beloved names were Daddy and PawPaw. John was a farmer and papermill worker retiring with 43 years with National Gypsum Company. He was a trader and collector at heart and a very generous and giving man. A 1959 graduate of Munford High School, John received his Associates Degree from Southern Union and attended Auburn University. He was a longtime member of Munford Baptist Church where served in different capacities throughout the years. There are not enough words to say all that he was or all that he meant to so many. He will be greatly missed. Service for Mr. Harmon will be held at 2:00 p.m. on Friday, July 23, 2021 at Miller Funeral Home Chapel. Pastor John Harris, Pastor Jay Haynes and Brother John Trickett will officiate. The family will receive friends from 1:00 till 2:00 on Friday. Pallbearers will be his grandsons, Jay Haynes, Tyler Haynes, Blake Haynie, Brett Haynie, Payne Stancil, Evan Stancil, Chase Greenwood and Garrett Dempsey. Honorary pallbearers will be his nephews. The family would like to extend a special thanks to Compassus Hospice and nurse Rachael for their excellent care and compassion during a difficult time. Due to Covid19, please take precautions to protect yourself and others in attendance. Face masks not required but welcome if you desire.

John Culver Harmon, 79, of Munford, passed away peacefully at home with loved ones by his side. He is preceded in death by his parents John Odell and Daisy Lee Harmon and great granddaughter Evelyn Mae Haynes. Left to cherish his memory are... View Obituary & Service Information

The family of Mr. John Culver Harmon created this Life Tributes page to make it easy to share your memories.

John Culver Harmon, 79, of Munford, passed away peacefully at...