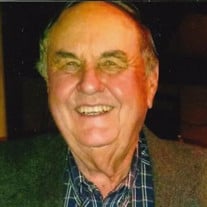 Mr. Jo T. Dearman, 81, a resident of Montgomery, Alabama, passed away on February 18, 2021. Jo was born on July 29, 1939 in Jackson Co., Alabama. He was later a resident of Munford, Alabama and graduated from Munford High School in 1957. He attended Auburn University and graduated with a degree in Civil Engineering in 1963 before entering the U.S. Army Corps of Engineers. After discharge from the Army in 1966, he began a long career in the road building industry in Alabama and in 1969, he oversaw the original paving of The Talladega Superspeedway. In 1974, he started Alabama Asphalt Contractors in Montgomery which he owned until 1983 and he remained active in business and the industry until 2020. Jo was appointed by Gov. George Wallace to be the Secretary of the Alabama Contractors Licensing Board. Jo had many interests and was curious about everything. He loved life and never met a stranger. He would talk to anyone about anything. Jo is survived by his wife of 60 years, Emily Snow Dearman; son, Terry Dearman; brother, Cramer Dearman; sister, Maleah Barton; sisters in law, Bobbie Lackey, Judy Moon, and Cathy Snow, as well as numerous nieces and nephews. There will be a graveside service and burial on Thursday, February 25, 2021 at 2:00 pm at Munford Memorial Cemetery with James Swinford officiating. Pallbearers will be Joey Reinier, Jakob Reinier, Kaleb Lackey, Jimmy Neal Lackey, Gordon Moon, and Boyd Lakey. Honorary pallbearers will be the 1957 Munford High School graduating class.

The family of Mr. Jo T. Dearman created this Life Tributes page to make it easy to share your memories.