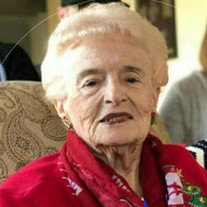 Jean Munroe Bain dedicated wife, mother, and MeeMaw entered into arms of her Lord Wednesday, December 15, 2021. Mrs. Bain was preceded in death by her loving husband of nearly 59 years, Lonniel Warren Bain as well as her parents, Arillia Henson Munroe and J Chester Munroe. Services will be Monday, December 20 at Trinity Baptist Church in Oxford with visitation from noon until the service time at 2:00 pm. The service will be conducted by her pastor, Dr. C.O. Grinstead, Rev. Jeff Smith, and Rev. Jerry Johnston. A graveside service will follow at Dogwood Trail Cemetery. She is survived by her brother, Tommy Munroe (Mildred), sons David Bain (Debbie), Paul Bain (Nancy), and Phil Bain (Charlene), and daughter, Martha Bain Boling (Les), ten grandchildren, Jason Bain (Corrie), Adam Bain (Erika), Daniel Bain (Nikki), Kristen Tripp (Lucas), Amy Carter (Jordan), Jeff Bain (Ashley), Stephanie Bain, Emily Bain-Leonard (Rob), Robert Kimbrough (Christian), and Livi Junior (Micah), 27 great grandchildren as well as many nieces and nephews. Pallbearers will be grandsons Jeff Bain, Jordan Carter, Micah Junior, Robert Kimbrough, Rob Leonard, and Adam Bain. Mrs. Bain was born November 14, 1931 in Cleburne County. Her family moved to Oxford in 1941 where they joined Trinity Baptist Church. She served as pianist and in many other ministries until 2020. She had a heart for the Youth Ministry and Missions and gave generously in many ways to spread the Gospel. A 1949 graduate of Calhoun County High School, which later became Oxford High School, she loved everything Oxford and was a dedicated Yellow Jackets fan. Her children and grandchildren were involved in sports, cheerleading, choral, and band at Oxford High. Mr. and Mrs. Bain were supportive of all and attended the activities of each one. Most every Friday night in the Fall, Mrs. Bain could be found in her reserved seat at Lamar Field until she became unable to attend in 2020, at which time she watched the streaming games at her son’s home each week. She was also a fan of the Atlanta Braves, and Alabama Football. With a strong work ethic, Mrs. Bain began working at Metropolitan Life Insurance in 1949 at the age of 18 until retiring in 1982. She worked in her retirement years as lab secretary at Stringfellow Memorial Hospital for 22 years. Mrs. Bain never met a stranger and made a lasting impression on everyone she met. While our Mother and Meemaw will be deeply missed, the family stands secure in the knowledge that she is now in the presence of the Lord. In lieu of flowers, donations made be made to the Mission Fund, Truth Radio or Youth Group of Trinity Baptist Church, 1500 Airport Road, Oxford, AL 36203. “Whether therefore ye eat, or drink, or whatsoever ye do, do all to the glory of God.” (I Corinthians 10:31, KJV)

The family of Mrs. Jean Munroe Bain created this Life Tributes page to make it easy to share your memories.