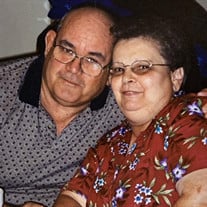 James Edward McCullar was born on May 12, 1940. He married Barbara Herod on December 23, 1966, in Alabama. He was preceded in death by his parents, John and Alma McCullar; two sisters, Thelma and Ruth; one brother, Walter Leroy, and the love of his life, Barbara Herod McCullar. He is survived by two brothers, Cecil and Wayne; a host of nieces nephews, great nieces and great nephews. He is also survived by special friends, Dixie and Corey Free and their children, Dalton, Kendall and Mason, Phillis Conaway, Ashley Portious, and all of the ladies at The Sizzler and Betty’s BBQ. James was born in Tucson, Arizona. The family returned to Texas to farm in Lubbock, Texas. They then moved to the Bootleg Community in Deaf Smith, Texas. James left farming to join the Army in 1962. He served 2 years. During his service, he met his loving wife and they made Oxford their home. James was known to be intelligent, industrious, and hard working. He took his farming skills and Army skills to become a dependable jack-of-all trades. He worked for Wally Clegg Poultry then worked in Civil Service at Anniston Army Depot until his retirement. A funeral service will be held on Monday, November 29, 2021, at 12:00 pm in the Toby Miller Chapel at Miller Funeral Home. A burial will follow the service at Forestlawn Memorial Gardens in Anniston. The family will receive friends on the same day from 11:00 am until the time of the service. Honorary pallbearers will be Corey Free and Dalton Watts. Family and friends will serve as active pallbearers. James was a committed husband and devoted brother. He was a great uncle to many nieces and nephews. James will be remembered for being a generous man all his life.

James Edward McCullar was born on May 12, 1940. He married Barbara Herod on December 23, 1966, in Alabama. He was preceded in death by his parents, John and Alma McCullar; two sisters, Thelma and Ruth; one brother, Walter Leroy, and the love... View Obituary & Service Information

The family of Mr. James Edward McCullar created this Life Tributes page to make it easy to share your memories.