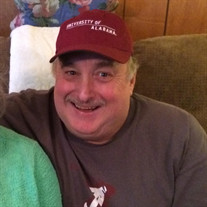 A graveside service for Mr. James Dwayne, Lumpkin, 62 of Anniston, will be on Saturday, January 2, 2021 at 1:00 pm at Forestlawn Memorial Gardens. The family will receive friends on the same day from 11:30 am – 12:30 pm at Miller Funeral Home. Mr. Lumpkin passed away on December 29, 2020. He is survived by his wife, Gina Nisbett Lumpkin; daughter, Kasey Bittle (Anthony); grandchildren, Mason, Ansleigh, Ruthie, Emery and Maverick; mother, Nell Lumpkin; brother, Chris Lumpkin, and several aunts, uncles and extended family members. He is preceded in death by his father, James W. Lumpkin, and a brother, Larry Lumpkin. Pallbearers will be Anthony Bittle, Jeff Nisbett, Jacob Nisbett, and Clint Gallahar. Mason Bittle will serve as an honorary pallbearer. Mr. Lumpkin was a lifelong resident of Calhoun County. He was graduate of Oxford High School and then went to Gadsden State University where he graduated with an associates degree in electronics. Mr. Lumpkin enjoyed being outdoors, especially hunting and fishing. He had a great sense of humor and was a great joke teller. More than anything, he loved spending time with his family, especially his grandchildren.

The family of Mr. James Dwayne Lumpkin created this Life Tributes page to make it easy to share your memories.

A graveside service for Mr. James Dwayne, Lumpkin, 62 of Anniston,...