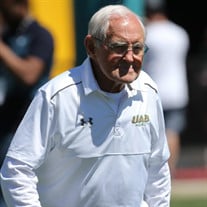 In loving memory of James C. Hilyer, Jr. (1935 –2022) James “Jim” Hilyer, age 86, passed away in Birmingham, AL on January 26 with his wife at his side. Known widely and affectionately as “Coach” or “Doc,” Jim was a man of many talents, degrees, and accomplishments who touched many lives. Jim is best known as the first head football coach at the University of Alabama at Birmingham (UAB). After starting a club team, Jim launched the football program at UAB with no funding and players overlooked by other programs. UAB football competed at the Division III level for 2 years and the I-AA level for 2 years. Coach Hilyer had 4 winning seasons and compiled a 28–12–2 record during 1991-94. He still holds UAB football’s best win-loss record. Jim returned in 2016 to help Coach Clark with the return of UAB football. In January of 2021, Coach Hilyer was inducted into the UAB Athletics Hall of Fame. Jim’s numerous degrees include a doctorate in educational psychology, a master’s in educational administration, and a master of public health. He had several faculty appointments and directed a 10-year, NIH-funded grant to benefit City of Birmingham firefighters and police. As a nationally certified sport and exercise psychologist, Jim accompanied the US Paralympic team to the 2004 Summer Paralympics in Athens, Greece and the 2008 Summer Paralympics in Beijing, China. He provided counseling services to UAB student-athletes and at Eden Springs, A Time for Change, Christ Church Anglican, and other locations in Wakulla County. Jim was born in 1935 to James Carson Hilyer, Sr and Ivera Stone Hilyer. He grew up in the tiny hamlet of Sycamore in Talladega County, AL. In 9th grade, Jim transferred to Sylacauga High School to play football (LB & OG). He lived with his maternal grandparents until graduating at age 16. Jim obtained a football scholarship to Itawamba Junior College in Mississippi where he played LB & OG for 2 years. Jim then signed with FSU, but overwhelmed by the school and city, he chose instead to play football at Stetson University in Deland, FL. He earned his undergraduate degree in Biology and Physical Education from Stetson. Jim’s coaching career began at Mainland High School in Daytona Beach, FL (1957-63), where he coached football and track and also played for the Orlando Thunderbirds of the Continental Football League (1958-60). Jim then joined the staff at Mississippi State University under Paul Davis (1963-68). Jim next coached at Auburn University under Ralph “Shug” Jordan (1968-73). In 1973, he joined George Allen and the Washington Redskins staff and went to a Super Bowl. Jim returned to Auburn (1976-82), and then coached for the Birmingham Stallions of the United States Football League (1982-85). While at Auburn, Jim recruited James Owens, the first African American to play Division I football in Alabama. Jim was a fitness enthusiast, exercising several hours a day, seven days a week. In his younger days, Jim was a competitive power lifter. He later took up running and ran multiple marathons. Jim is survived by his wife of 32 years, Lynn Artz, adored son Chase, two beloved daughters (Laurie, Lisa) from an earlier marriage to Barbara McQueen (deceased), one son-in-law (Tom), one precious granddaughter (Carson) & her husband (James), his loving sisters- & brothers-in-law, and other extended family. In lieu of flowers, please just appreciate knowing Jim, donate to your favorite charity, or request information about a memorial fund being established to place a suitable remembrance on UAB campus.

The family of James C Hilyer Jr. created this Life Tributes page to make it easy to share your memories.