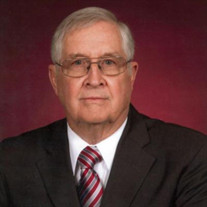 A funeral service for Coach Jack Grizzard, 92 of Oxford, will be on Sunday, April 18, 2021 at 3:00 pm at Lakeview Baptist Church. Rev. Buddy Nelson, Rev. Jerry Starling, and Rev. Chris Spurlin will be officiating. The family will receive friends on the same day from 12:00 pm until the time of the service. Mr. Grizzard passed away at his home on April 10, 2021. He is survived by his daughter, Erin Grizzard; four grandchildren, Briana Green, Tyler Holmes, Tara Jones, Tucker Holmes; three great grandchildren, Tori Dobson, Dawson Dobson, Emma Holmes, and several extended family members and friends. He is preceded in death by his wife of 67 years, Sara Grizzard; son, Brian Grizzard; parents, Clifford and Bertha Grizzard and his siblings, Ted Grizzard, Billy Grizzard, Devada Sparks, Harold Grizzard, and Marvelle LeCroy. Pallbearers will be Jerry Hollingsworth, Billy Don Grizzard, Ralph Brannon, Chris Jones, Tucker Holmes, and David Williamon. Honorary pallbearers will be Shelton Cobb, Ricky Fowler, Terry Henley, Jerry Reaves, Judy Williamon, Dewayne Lee, Larry Young, and all former Oxford High School football players of his. Mr. Grizzard played football Oxford High School where he was the captain of the football team and was voted the most outstanding senior athlete. After school, he joined the United States Army where he served proudly for two years. He served in the Korean War in the supply unit. After his military service, he obtained his masters degree in education and was a graduate from Jacksonville State University and The University of Alabama. Mr. Grizzard taught math and vocational high school. He was the first teacher to teach trigonometry and calculus at Oxford. He taught for over 33 years. Mr. Grizzard was a member of Lakeview Baptist Church where he taught Sunday School longer than he taught at school. He loved his church, his church family, and serving his Lord. Coach Grizzard had a passion for teaching. He loved giving swim lessons at Oxford Lake, molding the minds of his students, and helping his football players be the best athletes they could be. Coach Grizzard was inducted into the Calhoun County Sports Hall of Fame. Mr. Grizzard was active in many organizations such as the NRA. Mr. Grizzard and his wife loved John 3:16, ‘For God so loved the world that he gave his only begotten Son that whosoever believeth in Him should not parish but have everlasting life.’ Mr. Grizzard loved his family, especially his grandchildren. He will be deeply missed. The family would like to extend a special thank you to Mr. Grizzard’s grandchildren, Adara Holmes, David and Judy Williamon, Dewayne Lee, Vicki Everett, Renee Reynolds, Ann Fisher, June Reeves, Peggy Spurlin, Ludy Cruse, and Bobby Pope for the love and care they showed Mr. Grizzard and his family. Coach: The Man, The Myth, The Legend

A funeral service for Coach Jack Grizzard, 92 of Oxford, will be on Sunday, April 18, 2021 at 3:00 pm at Lakeview Baptist Church. Rev. Buddy Nelson, Rev. Jerry Starling, and Rev. Chris Spurlin will be officiating. The family will receive friends... View Obituary & Service Information

The family of Coach Jack Grizzard created this Life Tributes page to make it easy to share your memories.

A funeral service for Coach Jack Grizzard, 92 of Oxford, will...