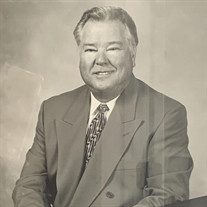 Private family services for Mr. Hugh D. ‘Toby’ Miller will be on Sunday, May 3, 2020 at 2:00 pm at Miller Funeral Home in the chapel named after him. Dr. John White, Bro. Buddy Nelson and Dr. C.O. Grinstead will be officiating. The service will be live streamed on the Miller Funeral Home and Crematory Facebook page. On Saturday, May 2, there will be a public visitation from 9:00 a.m. until 4:00 p.m. at the funeral home. With the current COVID-19 situation we are providing the opportunity for people to come throughout the day, sign the book, while maintaining social distancing. Mr. Miller went home to be with his Lord and Savior on April 28, 2020. He is survived by his loving wife of 58 years, Dianne Miller; children, H. Dudley Miller Jr. (Valeri), Alesia Miller, and Patrick Miller (Shelley); grandchildren, Hugh Dudley ‘Trey’ Miller III, Autumn Miller, Dalten Martin, Deidre Martin, Dakota Martin, Ashlyn Miller, Wesley Miller, Kayte Boyd, Logan Boyd, Clay Boyd (Autumn); great granddaughters, Gracie Crowe and Kennedy Boyd; caretaker and adoptive son, Kenny Mayne, and a host of extended family members and friends. He is preceded in death by his parents, Hugh Bob Miller and Myrtie Miller; brothers, Benny Miller and Buddy Miller. Pallbearers will be Ricky Howell, Paul Williams, Jerry Carter, Dwight Rice, Bruce Rice, TK Miller, Randy Beshears, and Steve Hurst. Honorary pallbearers will be the staff of Miller Funeral Home, Miller Florist and Miller Monument. Toby and Dianne Miller established Miller Funeral Home and Crematory in April of 1970 operating under the name of Miller-Robinson Funeral Home. The Robinson name belonged to James H. Robinson, a licensed embalmer who agreed to partner with Toby Miller until the time he completed Embalming School and earned his embalmers license. Toby Miller enrolled into the funeral service program and Jefferson State Junior College in 1970 and commuted four nights a week for two years earning his degree. Initially, the business operated with Toby Miller being the only full time person and a couple of part time people. After receiving his degree in Mortuary Science the business was relocated in 1972 to its present site at 50 Hamric Dr East. In the same year, Congressman Bill Nichols selected him to be Oxford’s Outstanding Young Man of the Year. He purchased Mr. Robinson’s part of the business and officially changed the name to Miller Funeral Home. In 1974, Toby Miller was appointed to The Northeast Alabama Regional Medical Center’s Board of Directors to represent the City of Oxford serving six five-year terms. During those 30 years of service, he served on many committees and was chairman on several committees. When he retired in 2005, he was serving as Vice Chairman of the Board. In 2009, he once again was asked by RMC to serve on another of its boards. He has the distinguished honor of serving more time than any other appointee. RMC is Calhoun County’s second largest employer. Toby Miller was a charter member of the Oxford Quarterback Club, the Rotary Club, and organized the Oxford Rescue Squad which operated out of the funeral home for a few years. In 2000, Toby Miller joined eight other businessmen in the organization of Cheaha Bank. Cheaha Bank has grown to serve in four locations in Calhoun County. In 1979, Toby made the best decision he could by turning his life over to his Lord and Savior. He was currently a member of Lakeview Baptist Church. Several years ago, Toby was facing death and had a Heavenly experience where he saw his Savior. He used this story to reach out and minister to others. While Toby was in high school, he played football and basketball. He was one of the best to play basketball at Oxford High School. He was an All County. For many years, Toby coached little league football and basketball. During his coaching years he was able to leave an impact on several children’s lives. Toby loved old cars and attending car shows all over the South. He was a member of Bama Street Rods. Mr. Miller was a mentor to many people and a man who truly loved God and his family. He will live in our hearts forever. To order flowers, please visit www.millerfloristandgifts.com or call 256-835-0911

The family of Mr. Hugh D. 'Toby' Miller created this Life Tributes page to make it easy to share your memories.