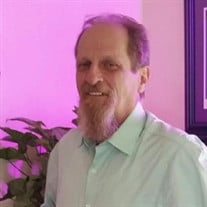 Mr. Helio D. Mendes, 60, currently of Talladega, passed away on August 23, 2020. A memorial service will be held on Friday, August 28, 2020 at 11:00 am in the Toby Miller Chapel at Miller Funeral Home. The family will receive friends on the same day from 10:00 am until the time of the service. He is survived by his wife, Regenia Mendes; daughter, Stephanie Johnson (Toriano); daughter, Samantha Green (Jeremy); grandchildren, Toriano Johnson Jr., Tyler Johnson, Carrington Green and Abigail Green; siblings, Ruben Lima, Valquiria Nadeau, Arcelina Wheeler; best friend, Matt Phillips, and a host of extended family members and friends. He is preceded in death by his parents, Manuel and Ana Mendes; siblings, Lidia Humpert, Elmano Mendes, and an infant sister. Helio was born on August 8, 1960 in Praia Da Vitoria, Azores, Portugal. He was raised in the Catholic faith. He came to the United States on October 30, 1974 at the age of 14. He made his original home in Ohio before moving to California then Florida. In 1994, he made Talladega, Alabama with his wife and family. Helio was a jack of all trades. He knew how to fix anything that was broken. He loved to tinker and working in his garage with his tools. He enjoyed watching NASCAR, fishing, and cars, especially his 1966 Ford Ranchero, and Alabama Football. He enjoyed going to drag races with his brother in law, where he was one of his pit crew. Helio was loved by everyone and never met a stranger. He did not judge anyone and had an extremely strong moral compass. He had an amazing work ethic and considered his coworkers family. Helio was a loving and caring husband, father, Paw Paw, and friend and will be sorely missed. Roll Tide Roll!!

Mr. Helio D. Mendes, 60, currently of Talladega, passed away on August 23, 2020. A memorial service will be held on Friday, August 28, 2020 at 11:00 am in the Toby Miller Chapel at Miller Funeral Home. The family will receive friends on the... View Obituary & Service Information

The family of Mr. Helio D. Mendes created this Life Tributes page to make it easy to share your memories.