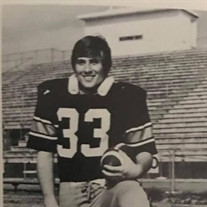 Funeral services for George Randy Bussey, better known as “The Legend”, age 56, of Southside, will be Sunday, November 4, 2018. The family will receive friends from 1:00 to 3:00 pm at Miller Funeral Home Chapel. The Celebration service will immediately follow at 3:00 pm. Randy passed away on October 30, 2018 at Gadsden Regional Medical Center surrounded by the ones who loved him most. Randy leaves behind to cherish his memory, his loving Wife, Melissa Bussey, his Daughter, Ashley Bussey, his Son, Aaron Teal, his Stepmother, Patricia Bussey, his Mother-in-law, Shirley Cook (Steve), his Brothers, Robby Bussey (Doreen), Rowan “Lil Brother” Bussey (Samantha), Don Skinner (Sissy), his Granddaughter, Ayla Robertson, his Nieces and Nephews, Landon Winfrey (Katie), Chelsea Bussey (Lee), Haley Bussey, and Caldwell Bussey. He was welcomed with loving open arms by his Father, Larry Bussey, his Mother, Ann Jordan, his Stepfather, Gene Jordan, and his Great Niece, Mary-Elise Hope Bussey. Randy was well-known, particularly in the baseball community. Randy was part of the 1978 3A State runner up team at Oxford High School. He assumed the right field and pitcher position during the big game. During his time playing at Oxford is where he earned his nickname, “The Legend”. Randy received a scholarship his senior year to the University of Alabama, but transferred to Gadsden State Community College where he played for 2 years. During his time at GSCC, he and his teammates won the State Championship in 1981 and finished as the runner up in 1982. He then signed at Jacksonville State University, under Coach Rudy Abbott. He and his teammates were the runner up of the 1983 Division II College World Series. After JSU, Randy coached for Oxford High School baseball for 4 years. He coached at Oxford during the years of 1987-1990. This is where he mentored and touched many lives of the players he coached. He took the 1989 Oxford baseball team to the State Championship, where they finished as the runner up. He then took a break from coaching until he hit the field again at Sacred Heart Catholic School in 2008-2011 where he coached for 4 years with his Brother, Don Skinner. What an impact he made on the players they coached. He then went on to coach one of his most precious, loved players, his Granddaughter. His Granddaughter, Ayla Robertson, received the privilege in 2017 of being coached by her Paw Paw, “The Best of the Best”. If you knew Randy, you knew he was a great athlete but an even better person. He had a heart of gold. His hobbies included: fishing, loving and taking care of his animals, sports, and especially anything dealing with Auburn University. One of his favorite things to do while watching Auburn play any sport, was calling his brothers, Skin and Lil Brother to discuss the details of what was happening during the games, whether good or bad. In his memory, in place of flowers, Randy’s family would like donations to be made to: “A League of Our Own Oxford”. An organization that’s mission is: Every child deserves the opportunity to play baseball. Everyone knew Randy’s love for sports especially baseball and he would love for every child, no matter the disability, big or small, to be able to play and love the game he loved so dearly. Please make donations to: “A League of Our Own Oxford” PO Box 3650 Oxford, AL 36203.

Funeral services for George Randy Bussey, better known as &#8220;The Legend&#8221;, age 56, of Southside, will be Sunday, November 4, 2018. The family will receive friends from 1:00 to 3:00 pm at Miller Funeral Home Chapel. The Celebration service... View Obituary & Service Information

The family of George Randy Bussey created this Life Tributes page to make it easy to share your memories.

Funeral services for George Randy Bussey, better known as “The...