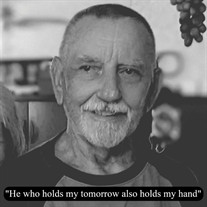 A funeral service for Mr. Gary Brasher, 73 of Oxford, will be on Sunday, March 6, 2022, at 2:00 pm at Bethlehem Baptist Church in Oxford. A burial will follow the service in the church cemetery. Bro. Jerry Cobb and James Kyle Brasher will be officiating. The family will receive friends on the same day from 1:00 pm until the time of the service at the church. Mr. Brasher went home to be with his Heavenly Father on March 1, 2022, at his home surrounded by family. He is survived by his wife of 53 years and 6 months, Linda Jean Brasher; children, Tammy Lynn (Greg) Mathews of Dearmanville, Gary Lane Jr. (Katrina) Brasher of Oxford, James Kyle (Dara) Brasher of Oxford; grandchildren, Shan Micheal Rogers, Jordan Lane Rogers, Dalton Riley Lewellyn, Nathan Lane Brasher, Tanner Lee Brasher, Wyatt James Brasher, Catherine Grace Brasher, Hudson Colt Brasher, Samuel Zacharias Brasher, and a little girl on the way to be named Emberlynn Debra Brasher; great grandchildren, Wesley Lane Rogers, Peyton Bo Rogers, Elle Rose Rogers, Cooper Jeffrey Rogers, Jenleigh Brasher, and a Little Boy Rogers on the way; one brother, Alvin Brasher; his poodle dog daughter, Allie Brasher, and a host of extended family members and friends. He is preceded in death by his parents, Samuel Harvey and Audrey Iteria Brasher, and his siblings, Brenda Macullars, Linda Faye Thisler, Doris King, Dorothy Boyd, Melvin Brasher, Jerry Brasher, Houston Brasher, and Walter Brasher. Pallbearers will be Shan Rogers, Jordan Rogers, Nathan Brasher, Tanner Brasher, Greg Mathews, and Wyatt Brasher with Dennis Brasher and Jimmy Creed serving as honorary pallbearers. Mr. Brasher graduated from Saks High School in 1968, and married his high school sweetheart on August 19, 1968. Mr. Brasher was a member of Bethlehem Baptist Church. He worked for a retail sore called Masons in the shoe department, Classic Ribbon, Warner, Imperial Redding, and from there he went to work at FMC and worked there for 28 years. He worked at NABI for 9 years and retired from the incinerator in Anniston in 2013. Mr. Brasher coached baseball for over 45 years. He also coached all of his children in sports. He was an avid gardener, and loved flowers. His yard was always beautiful. He loved for his yard to look great. He collected many things such as guns, coins, California Raisins, knives, antique fishing lures, and baseball cards. He enjoyed going to yard sales and trade days. His greatest blessings were his family. He loved his grandchildren as they were his life. He would sacrifice anything to see them happy. Mr. Brasher will be greatly missed by all those that love him the most.

A funeral service for Mr. Gary Brasher, 73 of Oxford, will be on Sunday, March 6, 2022, at 2:00 pm at Bethlehem Baptist Church in Oxford. A burial will follow the service in the church cemetery. Bro. Jerry Cobb and James Kyle Brasher will be... View Obituary & Service Information

The family of Mr. Gary Brasher created this Life Tributes page to make it easy to share your memories.

A funeral service for Mr. Gary Brasher, 73 of Oxford, will be...