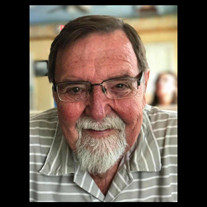 Ed Whatley, age 73 of Oxford, passed away peacefully on January 7, 2021. He is survived by his loving wife of 45 years, Gayle; his sons, Phillip (Valerie) of Trussville and Alan Whatley of Oxford; his brother, John Whatley (Donna); his granddaughters, Ashleigh, Isabella, and Olivia Whatley; his nieces, Shannon Bowen, Oakley Luker, and Grace Whatley; his sister-in-law, Gwen Mitchell, and his beloved pet, Maggie. He is preceded in death by his father, Reverend Charles William Whatley, and his mother, Inez McFall Whatley, both of Jacksonville. Mr. Whatley was a graduate of Jacksonville High School and received his master’s degree in Special Education, and his E.Ds. in School Administration from Jacksonville State University. He proudly served as a sergeant in the United States Air Force with the Strategic Air Command, during the Vietnam War. Mr. Whatley was an educator for thirty-four years serving in the classroom and as the Community Education Coordinator and Director of the Vocational School with the Anniston City School System, and as the Principal at Oxford High School, Weaver High School, and Walter Wellborn High School. He influenced the lives of many of his students throughout the years and served as a mentor to young educators across the county. He served his city in the capacity of Chair of the Oxford Planning Board and the Oxford Water Board. His interest in politics led him to serve as a campaign manager for several local political campaigns. Mr. Whatley was a self-taught master of the five-string banjo. He happily played his banjo for 45 years with Lynn Payne, David Houston, and Rudy Payne, as Chulafinnee Bluegrass. He had a deep love of football, serving as a coach in city league football for several years. He had a lifelong love for the Alabama Crimson Tide, which he followed avidly. He was a man of God and was a member of the First Baptist Church of Oxford. Mr. Whatley cherished each of his three granddaughters, who were the lights of his life. A memorial service will be held on Sunday, January 17, 2021 at 2:00 pm in the main sanctuary at First Baptist Church of Oxford with Bro. Justin Holland officiating. The family will receive friends on the same day from 12:00 pm until the time of the service at the church. In lieu of flowers, please consider making a donation to The Sparrow’s Song, an outpatient treatment facility for infants addicted to drugs taken by the mother during pregnancy. Donations can be mailed to The Sparrow’s Song, PO Box 3073 Oxford, AL 36203. The family requests that all those in attendance please wear a face mask and practice social distancing.

Ed Whatley, age 73 of Oxford, passed away peacefully on January 7, 2021. He is survived by his loving wife of 45 years, Gayle; his sons, Phillip (Valerie) of Trussville and Alan Whatley of Oxford; his brother, John Whatley (Donna); his granddaughters,... View Obituary & Service Information

The family of Mr. Ed Whatley created this Life Tributes page to make it easy to share your memories.

Ed Whatley, age 73 of Oxford, passed away peacefully on January...