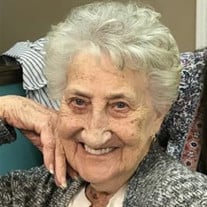 The family of Dorothy "Jean" Sewell, age 82, of Oxford, Alabama, gather in remembrance and celebration of her life and the courage and grace in which she lived it. Jean was born July 28, 1936, in Newell, Alabama, to Lorene Hyatt and William Howard Lovvorn. She married the love of her life, William Landers Sewell, on October 26, 1954. As a young child she loved singing and enjoyed performing with local gospel groups and in the church choir. At age 13 she met her childhood sweetheart, Bill, and so began their love story. They married in 1954 and raised three children (although Bill would say she raised him as well). Together they shared a lifetime of adventure which included traveling across the country, eventually visiting every state except Alaska and South Dakota, and even two tours in Japan. After a brief trial at retirement, she joined her husband driving an 18-wheeler for nearly 30 years, until his death in 2009. Jean loved spending time outdoors, on the river, working in her yard, riding in her lawnmower and golf cart. She loved laughter and time spent with friends and family and caring for her dogs. Although many lovingly called her "Mom," the complete joy of her heart was her three children. Perhaps the strongest woman we've ever known, she fought back against the devastating diagnosis of cancer for five months with amazing courage, eventually moving to her daughter's home in Virginia. She spent her final days surrounded by family and friends, sharing stories, laughter and fond memories. On May 13, 2019, she passed peacefully in her sleep with her children by her side. Though our hearts ache for our loss, we rejoice that she is with the Lord, and again reunited with Dad. Jean was preceded in death by her parents, Howard and Lorene Lovvorn and her husband of 64 years, Bill Sewell. Survivors include her three children, William Terry Sewell and his wife Dana of Oxford, AL.; Lisa Sewell Scheels and her husband Richard of Chesapeake, VA.; and Tracy Lee Sewell of Munford, AL. She also leaves five grandchildren, Pam Jones of Oxford, AL., Brian Salers, Lauren Scheels and Kaitlin Scheels of Chesapeake, VA., and Tiffany Keel of Anniston, AL. as well as six great grandchildren. Graveside services will be held at 1:00 p.m. on Sunday, July 28th at Blue Eye Baptist Church in Lincoln, AL. Family and friends are welcome.

The family of Dorothy "Jean" Sewell, age 82, of Oxford, Alabama, gather in remembrance and celebration of her life and the courage and grace in which she lived it. Jean was born July 28, 1936, in Newell, Alabama, to Lorene Hyatt and William... View Obituary & Service Information

The family of Dorothy 'Jean' Sewell created this Life Tributes page to make it easy to share your memories.

The family of Dorothy &quot;Jean&quot; Sewell, age 82, of Oxford, Alabama,...