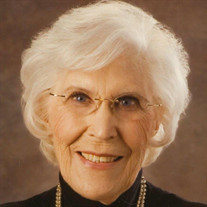 Dorothy Nell Gore, age 97 3/4, left this life to reunite with her husband George on October, 24, 2021. She died of natural causes at RMC Hospital in Anniston, Alabama after a two-day stay. She was a resident of Oxford, AL until recently where she resided at NHC Place assisted living center. She lived in Hyde Park, Utah from 1982 to 2006 and after that in Cedar Hills, Utah, Eugene, Oregon and Bountiful, Utah. Born January 17, 1924, in Amarillo, Potter Texas, she was the only child of William Paul Matthews, born in PA. and Anna Grace Gruner born in Missouri. She is preceded in death by her husband, George Gordon Gore of NM, and their son, Richard Gore. She is survived by her 5 living children: Steve Gore, (Ellen), Friendswood, TX, Cheryl Dickey (Douglas, deceased) Brigham City, UT, Jeanette Pitcher (Clair) Oxford, AL, Barbara Sanchez (Louis, deceased) Fargo, North Dakota, Donna Ehrisman, (Dale) Burnville, NC Nell graduated from Amarillo, High School, in TX and then Baylor University School of Nursing in Dallas TX in 1945 with an RN degree. She specialized as an OR Nurse all her life. She worded at small hospitals in New Mexico and was the Operating Room supervisor at the large Salt Lake City County General Hospital. She then worked for 17 years in the OR at Womack Army Hospital, in Fayetteville, NC. She saved her first born son’s life when he was about 5 when an inexperienced doctor administered the wrong anesthetic to her little boy who was having a tonsillectomy. She married her sweetheart, George Gordon Gore, in Clovis, New Mexico, 22 June 1946 when George was newly returned from WWII service in the Navy. In 1949 she and her husband met the missionaries of the Church of Jesus Christ of Latter-Day Saints and united themselves to it in 1951. As a devoted member of her Church, she lived her faith by serving tirelessly in every capacity. In their retirement years Nell and George served 3 full-time foreign missions in Mexico, Australia, and Chile. Their door was always open to their children’s friends, single members of the military, and any friends they made along the way. They had a saying, “Why don’t you come over and we’ll make some memories!” Her hands were never idle, and she blessed all she knew with sewn or crocheted gifts. She also knew her way around a wood shop. She and her husband always had some do-it-yourself project going. She was an accomplished pianist with the gift of sight-reading most music. She played the organ and piano at church and many other special occasions. Her biggest fans are her family especially at Christmas when they sing around the piano. She cared for her mother who suffered from dementia the last few years of her life. Nell and George travelled all over the US visiting her 34 grandchildren, 88 plus great grandchildren and at least 7 great-great grandchildren. Because she does Family Tree Research she has travelled to Germany and Ireland to search their farms and homes there from the 1700’s. She has been to Alaska and Antarctica. After all her travels she is still very much a Texas Gal and she and her friendly southern ways will be missed.

Dorothy Nell Gore, age 97 3/4, left this life to reunite with her husband George on October, 24, 2021. She died of natural causes at RMC Hospital in Anniston, Alabama after a two-day stay. She was a resident of Oxford, AL until recently where... View Obituary & Service Information

The family of Dorothy Nell Gore created this Life Tributes page to make it easy to share your memories.