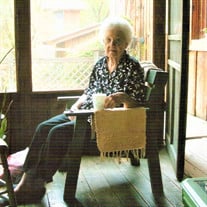 Last Downing Granddaughter of Downing Mill Dies at 101 Mrs. Dorothy “Dot” Box of Golden Springs, Alabama, died peacefully on 24 April 2021 in Anniston with her family beside her. Dorothy Adeline Garrett Box was born on 11 July 1919 in a house built by her father, James Daniel “JD” Garrett, halfway between Golden Springs and Choccolocco, the fifth of six children. Her mother, Daisy Dean Downing, was one of the 12 daughters of Jack and Addie Downing, proprietors of the Downing Mill in Choccolocco, and as a result, Mrs. Box was descended from multiple pioneer families of Calhoun County and of Alabama. Mrs. Box spent her entire life living within a half-mile of her birthplace, with the exception of extended visits to Wyoming in the 1920s and to Pensacola, Florida, in the 1930s. She attended Calhoun County High School—now Oxford High—and had numerous friends growing up in the Choccolocco and DeArmanville area, all of whom have gone on before her. In 1939, she married William H. Box of Anniston, a switchman for the railroad and full-time farmer. Incidentally, Mr. Box was also descended from a pioneer family of Alabama, and both his ancestors and Mrs. Box’s ancestors appear on the same page of the first census of Alabama in 1820. The couple settled in Golden Springs, where they raised their four children: Betty, Allen, Cindy, and Susie. In the early 1960s, Mr. Box, in his spare time, built a home for the family out of old World War II ammunition boxes and reclaimed old brick he had collected over the years. As her children grew, Mrs. Box, already well-known for her delicious and creative cooking, became active with the Calhoun County Extension Service. She gave demonstrations throughout the state, appeared on local TV, and won many prizes at the county fair. As a side-effect of her husband’s farming, Mrs. Box taught herself to create beautiful wreaths, dolls, and Nativity scenes from dried corn shucks. She added this newfound artistic talent to those of decorating wedding cakes, baking perfect biscuits, and fashioning pressed-flower pictures. A life-long member of Golden Springs Congregational Methodist Church, Mrs. Box sang in a gospel musical quartet, The Joyful Noise, in the 1980s with her son Allen, her daughter Susie, and her son-in-law. Mrs. Box is preceded in death by her husband of 61 years, William H. Box, along with her daughter, Betty Box Simpson, her son, Allen H. Box, and her two grandsons, Vince Box and Buddy Box. She is survived by her daughters, Cynthia Box Allen (David) and Susan Box Hanson; nine grandchildren, Pamela Simpson, Rhonda Simpson Nash (Billy), Anita Box Huey (Mack), Anna D. Allen, Rachel M. Allen (Adam Tetzlaff), Robin Hanson Leece (Jim), William Clark Hanson, Romelda Hanson Carden (Toney), and Mark Hanson (Beth), along with 16 great-grandchildren, 11 great-great-grandchildren, and 2 great-great-great-grandchildren, as well as numerous nieces and nephews. She was loved and adored by all who met her. And we are truly blessed to have known her. The funeral service will take place at Golden Springs Congregational Methodist Church, Anniston, Alabama, at 2:00 pm on Saturday, May 1, 2021, with visitation from 1:00 pm until service time. A graveside service will follow. Miller Funeral Home in Oxford, Alabama in charge of the arrangements.

The family of Mrs. Dorothy "Dot" Garrett Box created this Life Tributes page to make it easy to share your memories.