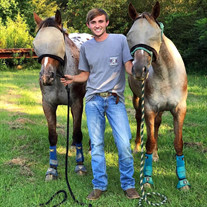 A funeral service for Colten Swade Farley, 23 of Anniston, will be on Thursday, April 1, 2021 at 2:30 pm at First Baptist Church of White Plains. Bro. Eric Snyder will be officiating. A burial will follow the service in his family’s pasture surrounded by his horses and dogs. The family will receive friends on Wednesday, March 31, 2021 from 5:00 pm – 8:00 pm at the church. Colten passed away on March 25, 2021. He is survived by his parents, Loren and Cindy Farley; brother, Austin Farley (Chase); grandparents, Earl and Joyce Ryser and their daughter, Jennifer Ryser; aunts and uncles, Joyce Mayo (Curtis), Sissy Jones (Floyd), Jerrell Campbell (Katrina), Randy Farley (Jamie Lynn), Gary Farley (Donna); cousins, Brooklyn Mayo, Tristan Mayo, Michelle O’Brien, Anna O’Brien, Kevin Moon, Dustin Farley, Brandi Farley, Courtney Thrash, Jacob Farley, Jasmine Farley, Shanda Hughes, Cami Patterson, Colton Whaley, and a tremendous amount of extended family members and close friends. He is preceded in death by his grandparents, Roger and Doris Farley, and Velma ‘Nanner’ Matthews. Pallbearers will be Loren Farley, Austin Farley, Tristan Mayo, Brady Kissic, Jacob Briggs, and Curtis Mayo. Floyd Jones and Earl Ryser will serve as an honorary pallbearer. Colten was such an outgoing and amazing person from the very start; he never met a stranger. He had the most beautiful smile and contagious laugh. He had a tremendous love for animals , old people, and little kids. He loved his Appaloosa horses and had his “Farley Appaloosa’s” herd well on its way with 3 babies due this year. Colten was definitely an Angel on earth, the way he touched and changed so many lives. He was taken way too soon and will be forever loved and missed every day. Words cannot describe how proud he made us, and how blessed we are to be his parents and to call him our son. Flowers will be accepted or a donation can be made to your local animal shelter in Colten’s honor.

A funeral service for Colten Swade Farley, 23 of Anniston, will be on Thursday, April 1, 2021 at 2:30 pm at First Baptist Church of White Plains. Bro. Eric Snyder will be officiating. A burial will follow the service in his family&#8217;s pasture... View Obituary & Service Information

The family of Colten Swade Farley created this Life Tributes page to make it easy to share your memories.

A funeral service for Colten Swade Farley, 23 of Anniston, will...