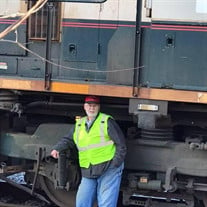 Bobby Keith “Peanut” Miller, age 57, passed away at his home in Leeds on March 26, 2019, and was finally and completely healed when he went to be with his Lord. Services will be held at 11 a.m., on Monday, April 1st, In the Toby Miller Chapel at Miller Funeral Home in Oxford, AL, with Revs. Billy Little, Rodney Gilmore, and Brad Moseley officiating. Burial will follow at Forestlawn Memorial Gardens in Anniston. Visitation will be Monday from 9a.m. to 11 a.m. at Miller Funeral Home. Keith (“Peanut”) was preceded in death by his parents, Bobby Kirk and Mona Sue Hicks Miller, and his grandparents, Cager and Ista Miller, and Weldon and Mae Hicks. He is survived by his wife, Debbie Morris Miller; his daughter, Breeanna Moore and her husband, Buddy, of Moody; beautiful newborn granddaughter, Anna Marie (“Raindrop”) Moore; sister, Lawanna (“Susie”) (Roy) Bennett, of Choccolocco; sister, Tammy (Grant) Nichols, of Heflin; step-son, Randy Stephenson of Alabama; step-daughter, Missy Cruit of Alabama; and nephew Brandon (Morgan) Morris, of Leeds. He is also survived by 10 other grandchildren; two great-grandchildren; very close friends in his community who he cherished and are too many to count; and a host of nephews, nieces, cousins, aunts and uncles. Keith (Peanut) was born on November 5, 1961, in Anniston. He was a native of Calhoun County and resident of the Leeds area for the past 18 years. He graduated from Oxford High School in 1980, and was a member of Lister Memorial Baptist Church. Keith (Peanut) began working with his daddy at Bobby’s service station in Oxford long before he could drive, and while there, developed his passion for anything that was motorized. He could talk at length about the inner workings of a lawn mower carburetor or the specifics of most any race track in the country, from dirt tracks to super speedways. His favorite NASCAR driver was the King, Richard Petty. Over his entire life, his favorite engines, though, were train locomotives. From a very early age, he became captivated by trains. Between the ages of 3 and 5 years old, almost all of his T-shirts had holes torn in the front where he would lean across the twisted top of a chain link fence just to get a better look at the trains that passed at the edge of the backyard. That passion lasted throughout his life, and he was blessed to be able to ride his last train just a few short days ago in Chattanooga, thanks to a surprise from his beloved daughter. Keith (Peanut) loved to laugh and enjoyed life. He seemed to never meet a stranger, always jovial and outgoing. Those who knew him, loved him, because he loved people. Anyone who was around for any length of time, soon knew he loved to fish every chance he could, from creek banks to the deep seas. His love for entertainment ranged from Ronnie Milsap and Marty Robbins, to the great Jerry Clower, to staged cowboy gunfights in east Alabama. In his younger days, he enjoyed “pushing the envelope,” which included skipping school for any reason that came to mind, especially for the time trials, or turning cars over at the Talladega Short Track. Later in life, he met and came to love his wife of 15 years, Debbie. They built a life together, and were a perfect match for each other, standing by the other through the good and bad times, thick and thin. He loved his family dearly, and he tirelessly demonstrated that love to his daughter Breeanna in exceptional ways, as he cared for and raised her to adulthood. Hearing him sing Red Sovine’s “Daddy’s Girl,” was so meaningful because she was indeed the center of his world. And while we may think he missed seeing his newborn granddaughter, it seems that they likely passed by each other as Anna Marie left Heaven coming to Earth, and Keith (Peanut) was headed home to Glory; maybe, just maybe, he gave her that extra hug on the way. God alone knows. Pallbearers will be Tim Eaves, Don Brasher, Sean Ellis, John McLaughlin, Dwight Rice, Brett Howell, Gary Black, and Brandon Morris. Honorary pallbearers will be Bruce Rice, Steve Templin, and Lance Bailey. The family also would like to express its deepest appreciation to the staff of Hope Hospice; Dr. John A. Piede and his staff at the Bruno Cancer Center, St. Vincent’s; and members of local area churches and the community who supported Keith “Peanut” and Debbie during the period of his declining health in recent months. Flowers are appreciated but donations also may be made to the American Cancer Society.

The family of Bobby Keith "Peanut" Miller created this Life Tributes page to make it easy to share your memories.