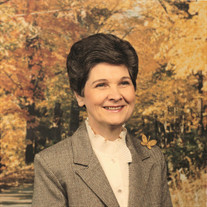 Blanche McCoy Hayes Blanche Hayes passed away on Tuesday, October 29th surrounded by family in Nashville, TN. She will be remembered as a loving wife, mother, grandmother, and friend by those who were blessed to know her. Blanche was a true southern lady full of grit and grace. Born at the dawn of the Great Depression, Blanche went on to become a successful entrepreneur, building several successful businesses. She was headstrong yet kept an open mind, as evidenced by her willingness to let go of first impressions and give a young man named Thomas Hayes a chance – a chance that would result in over 50 happy years of marriage. Blanche was a devoted wife and mother, giving all she had for the well-being of her family. She was a superior homemaker, filling each of her (many) homes with beauty, love, and hospitality. And while she may not have let her grandchildren sit on the beds once made, her creamed potatoes and mac n’ cheese more than made up for that minor inconvenience. In true southern fashion, Blanche never spoke a dishonest word and would deliver hard truths with kindness and gentleness. She never raised her voice, never lost her temper, and always looked for the good in others. She was industrious and found myriad ways to stay busy from shopping to her interest in studying genealogy. She enjoyed westerns and hated “dirty talk.” Blanche Hayes was a lady, after all. Above all else, Blanche was a devoted follower of Christ and found peace in the Lord. In her later years, she did not fear death but felt confident of her place in Heaven. May the Lord welcome her to his kingdom with open arms. Blanche is preceded in death by her husband, Thomas Hayes, She is survived by her sons, Michael and Stephen, sister Lillian Cline, daughters-in-law, four grandchildren, and four great-grandchildren. Visitation will be Saturday, November 2, 2019 from 11:00 until the service time at 12 noon. Following the service Blanche will be laid to rest at Forestlawn Gardens. The family requests no flowers. Donations may be made to Calvary Baptist Church located at 4157 US Highway 78 Oxford, AL 36203. Online condolences may be made to the family at: millerfuneralhomeoxford.com

Blanche McCoy Hayes Blanche Hayes passed away on Tuesday, October 29th surrounded by family in Nashville, TN. She will be remembered as a loving wife, mother, grandmother, and friend by those who were blessed to know her. Blanche was a true... View Obituary & Service Information

The family of Blanche M Hayes created this Life Tributes page to make it easy to share your memories.