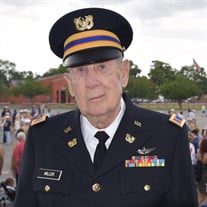 On December 26, 2019 Billy Miller, 92, passed away peacefully at home in Brandon, MS surrounded by his family. He was a veteran of WWII, the Korean War and the Vietnam War. Billy was born May 2, 1927 to Cager and Ista Miller in Hazelhurst, GA and grew up in Clay County, AL. After graduating from Lineville High School in Lineville, AL, Billy was drafted into the Army and proudly served for 20 years. Upon his return from WWII, he married the love of his life, Mary Ann Russell. Billy’s military career took them around the globe to Ayer, MA, Columbia, SC, Hampton, VA, Verona, Italy, Columbus, GA, Monterey, CA, Kaiserslautern, Germany and Enterprise, AL. Billy was in the forefront of helicopter aviation and flew nearly every helicopter and fixed winged aircraft in the Army inventory. After retiring from the Army as a CW3, Billy continued to fly with the Army as a civilian instructor pilot at Fort Rucker, AL. He then moved his family to Brandon, MS where he began his next career working for the Federal Aviation Administration (FAA). He briefly moved to Oklahoma City, OK where he served as an instructor pilot at the FAA Academy. He then moved back to Brandon, MS to continue working with the FAA until he retired again after 20 years of Federal Service. Upon his retirement from the FAA, Billy started his own aviation business, MARC, Inc., where he worked until his passing. Billy was of the Methodist faith and an active member of First United Methodist of Brandon where he took on many roles and taught Sunday school for years. He was a leader in the community and enjoyed his time as the president of the Brandon Exchange Club. He was also a Master Mason of the Hardy Howell Masonic Lodge, Delta, AL. Billy was an exceptional pilot, savvy businessman and generous mentor. He loved all things aviation, Alabama football, politics and, most importantly, he loved his family and friends. He was proceeded in death by Ann, his beloved wife of 69 years, his parents and parents-in-law, his brothers Jerry and Bobby and his brother-in-law, Major Bernard Russell (wife Carol Russell and son Capt. Bernie Russell.) Billy leaves behind his two sons Butch (Wendee) and Rusty (Leigh Anne); grandchildren, Lexi Miller, Chip Miller and Nikki Ramirez (Nik); great-grandson, Eden Ramirez. He is also survived by his sisters Juanita and Wynelle, his sister-in-law Wilma, cousins, nieces, nephews and many cherished friends who have blessed his life. Visitation will be held on Monday, December 30, 2019 from 5pm-7pm at Ott & Lee Funeral Home in Brandon, MS. An additional visitation will be held at Miller Funeral Home in Oxford, AL on Wednesday, January 1, 2020 from 5pm-7pm followed by a service at Eulaton United Methodist Church in Eulaton, AL on Thursday, January 2, 2020 at 8:30 am CST. Billy will be laid to rest at the Georgia National Cemetery in Canton, GA on January 2, 2020 at 1:30pm EST. In lieu of flowers the family requests that donations be made to the Gary Sinise Foundation or St. Jude Children’s Research Hospital.

On December 26, 2019 Billy Miller, 92, passed away peacefully at home in Brandon, MS surrounded by his family. He was a veteran of WWII, the Korean War and the Vietnam War. Billy was born May 2, 1927 to Cager and Ista Miller in Hazelhurst, GA... View Obituary & Service Information

The family of Mr. Billy Miller created this Life Tributes page to make it easy to share your memories.