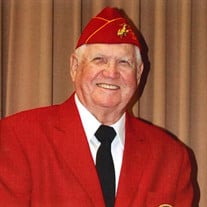 A graveside service for Mr. Billy Joe Beck, 87, of Oxford, will be on Tuesday, April 7, 2020 at 2:00 pm at Forestlawn Memorial Gardens with Rev. Yohan Hong. There will be a visitation on the same day from 11:00 am – 1:00 pm at Miller Funeral Home. Mr. Beck passed away on April 4, 2020 at Noland Hospital. He is survived by his wife, Carolyn T. Beck; children, Debra Dean (Mike), Michael Beck (Cindy), and Denise Burford (David); grandchildren, Becky NeSmith (Jeremy), Heath Dean, Haylee Dean, Shannon Beck, Jeff Beck, Micah Beck, Brett Burford (Meredith), Zack Burford (Holley), Andrea Owen (Bart); great grandchildren, Devon NeSmith, Aidan NeSmith, Benjamin NeSmith, Colin NeSmith, Eason NeSmith, Annalise Burford, Daniel Burford, Jason Owen, and Connor Owen; one great great grandchild, Kaden Pittman, and a host of extended family members and friends. He is preceded in death by his parents, JW and Minnie Beck; daughters, Dawn and Donna Beck; siblings, Tom Beck, Maley Beck, Bob Beck, Jim Beck, Ed Beck, Nevada Beck and Ruth Whaley. Pallbearers will be grandsons and grandsons in law. Mr. Beck retired from Fort McClellan Fire Department in 1990. He was a member of the United Methodist Church in Oxford. Mr. Beck served proudly in the United States Marine Corps during the Korean War. In the war, he received a Purple Heart. He was a member of the local Marine Corps League and was very active in the Toys for Tots campaign. Mr. Beck spent much time influencing children in the Oxford area. He was a volunteer tennis coach at Oxford High School and also gave tennis lessons at Oxford Lake. During his coaching career, he took a team to the Special Olympics to play tennis. He also played volleyball with local seniors. The volleyball team made it to the Senior Olympics in Texas. Mr. Beck was a God-fearing man who has left a great impact on hearts of many children in the area. He was one of the strongest, sweetest and most caring men. He was an amazing husband, father, grandfather and Christian and he never met a stranger. Mr. Beck will be greatly missed by all those that had the pleasure and honor of knowing him. In lieu of flowers, donations can be made to Easterseals or the East Central Alabama United Cerebral Palsy Center.

The family of Mr. Billy Joe Beck created this Life Tributes page to make it easy to share your memories.