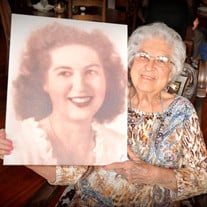 Beatrice Harmon Holmes, 93 years of age, passed away September 21, 2020, at her home with family by her side. Born to John Wyatt Harmon & Verdie Smith Harmon on September 4th 1927, she grew into a sweet, classy, southern lady, well respected, and loved by many. She graduated from Munford High School in 1946 and married Dallas C. Holmes in August of 1947, and they started their family and built their life long home. She was homemaker, always taking care of and giving to others, the most selfless person around. She was an amazing cook who always knew exactly what everyone wanted—everything was always better at her house. She enjoyed yard work and gardening in her flowers; simply talking about them made her day and there was never an ugly flower and never one she wouldn’t save. She took pride in everything she had and anything given to her. She was a true blessing in our lives and her smile, laughs, stories, jokes, and hugs will be very missed. She will live in our hearts and memories forever and she has always been our true angel. She was preceded in death by her husband, Dallas C. Holmes; her parents, John Wyatt Harmon & Verdie Smith Harmon; 3 brothers, John O’Dell Harmon, Robert Grady Harmon, James Purvis Harmon, and 4 sisters, Permelia Harmon Smith, Velma Harmon Armbrester, Edith Harmon Parnell, & Rachel Harmon Duke. She is survived by her daughter, Diane Thomas (Tim); daughter Denise Holmes; son Dwayne Holmes (Kathy); daughter Dana Lipham (Tim); Grandchildren, Bran Strickland (Lauren), Jared Thomas, Misty Holmes, Leah Thomas, Kendall Holmes, Celeste Goodwin, Summer Howard (Jeremy), Drew Goodwin (Kailee Hall); Amy Whitehead (Joseph); Great-Grandchildren, Asher Norton, Korbin and Cash Howard; Cohen Whitehead, and her beloved poodle, Eli. Pallbearers will be Dwayne Holmes, Bran Strickland, Jared Thomas, Drew Goodwin, Joseph Whitehead and Timothy Lipham. Viewing will be on Thursday, September 24, 2020 from 12:000 pm - 2:00 pm at Miller Funeral Home, followed by funeral at 2:00 pm in the Toby Miller Chapel. The service will be officiated by Bro. Jerald Hicks. Thereafter, the burial will be at Forest Lawns Garden in Anniston, AL. Flowers are welcomed, and donations to Bethlehem United Methodist Church, Munford are greatly appreciated.

Beatrice Harmon Holmes, 93 years of age, passed away September 21, 2020, at her home with family by her side. Born to John Wyatt Harmon & Verdie Smith Harmon on September 4th 1927, she grew into a sweet, classy, southern lady, well respected,... View Obituary & Service Information

The family of Beatrice Harmon Holmes created this Life Tributes page to make it easy to share your memories.