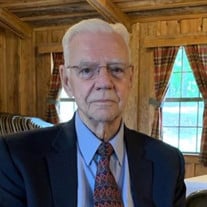 A visitation for Rev. Barney E. Austin, 78, of Oxford, will be on Friday, May 8, 2020 from 6:00 pm – 8:00 pm at Miller Funeral Home. A private service will be held on Saturday. Bro. Barney went home to be with his Lord on May 4, 2020. He is survived by his children, Karen Austin Berry (Mark), David Roy Austin (Stephanie), Kristy Austin Payne-Pate (Jeremy); nine grandchildren, Stephen Berry, Ashely Berry, Matthew Berry, William Roy Austin (Tabitha), Zachary Austin, Abby Austin, Austin Payne, Noah Payne, Andrew Payne; brother, William McKee Austin, and a host of extended family members and friends. He is preceded in death by his wife, Patricia Austin; parents, WR and Glades Austin; sister, Charlsie Parks, and a brother, James Austin. Bro. Barney was a 1959 graduate of University High School in Oxford, Mississippi. On June 2, 1974 he accepted his call to ministry. He attended Mid-America Baptist Theological Seminary. He graduated in May of 1979. Bro. Barney pastored many churches. Locally, he was the pastor at Oak Bowery Baptist Church in Ohatchee from 1981-1985. He was currently the pastor at Faith Baptist Church in Coldwater. He had a heart for missions and severed in places such as Russia, Africa, El Salvador and Jamaica. Bro. Barney will be deeply missed by all those that had the pleasure of knowing him.

The family of Rev. Barney E. Austin created this Life Tributes page to make it easy to share your memories.