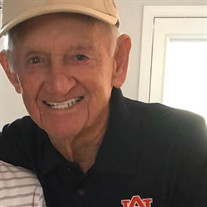 A funeral service for Mr. Albert ‘Sonny’ Henderson Jr., 86 of Munford, will be on Tuesday, December 21, 2021, at 12:00 pm in the Toby Miller Chapel at Miller Funeral Home. Bro. Buddy Nelson will be officiating. The family will receive friends on the same day from 11:00 am until the time of the service. Mr. Henderson passed away on December 18, 2021. He is survived by his wife of 65 years, Nancy Henderson; daughter, Suzanne Henderson Hess (Craig); grandchildren, Holden Hess, Jackson Hess; brother, Kenneth Henderson (Debra); sister, Grace ‘Pete’ Payne (John), and a host of extended family members and friends. He is preceded in death by his son, Rodney Henderson; granddaughter, Sonni Lauren Atchley; parents, Albert and Beulah Henderson, and several brothers and sisters. Pallbearers will be Jackson Hess, Holden Hess, Michael Finley, Kenny Henderson, Gary Edwards, and Gary Henderson. Mr. Henderson was a member of Lakeview Baptist Church in Oxford. He retired from Anniston Army Depot. Mr. Henderson enjoyed playing different sports, especially basketball and softball. He played on the 55 and older softball team in the Oxford and Anniston area. He also enjoyed playing golf. Mr. Henderson loved being outdoors, spending time hunting, fishing, and tending to his garden. He had a trophy room that he was very proud of and would show it off to anyone he could. Mr. Henderson was a loving and caring husband, father, grandfather, and friend and will be deeply missed by those who loved him the most.

The family of Mr. Albert ‘Sonny’ Henderson created this Life Tributes page to make it easy to share your memories.